(Adapted from my blog for WorshipSongsOnline)

In a time when it seems every worship leader in America has personally taken the exhortation to “Sing to the Lord a new song” by writing another modern worship song every single day, I often find myself drawn to the old, rather than the new. Now this desire of mine to zig when everyone else is zagging can be chalked up to the fact that I am a world-class curmudgeon. But it is also because I am an arranger. And one of the most fun things an arranger gets to do is take an old song and treat it in a new way, making it fresh and original again.

(Why do you think all those house remodeling shows are so popular on TV? People love to make old stuff look new!)

The most tried and true source of quality old material for the church choral arranger has to be the hymnal. Hymnody is a font of solid musical theology and beloved melodies, already proven to stand the test of time. And there is a hymn to speak to just about every life issue, and every sorrow or joy. What’s more, many hymns can be treated effectively in multiple musical styles, allowing the arranger to use these musical gems to reach just about any audience.

My earliest publications (1979!!!) were jazzy arrangements of “Swing Low, Sweet Chariot” and “Savior, Like a Shepherd Lead Us.” Then in the mid-1980s, I began series called “Hymns for Sunday Morning Worship” for Shawnee Press. Several of those arrangements, including “Jesus Paid It All,” are still in print.  And I recently re-arranged two of those arrangements into Calls to Worship. (“Call to Praise” and “Thy Name We Praise.”) 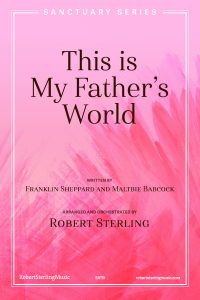 In the last 30+ years I’ve arranged more hymns than I can recall in just about every style from Symphonic, to Country, to Mambo! I am continuing my arranger’s journey through the hymnal here at robertsterlingmusic.com, where several of our latest offerings are new hymn arrangements.

But it’s not just hymns that are worthy of revisiting. Contemporary Christian Music has been around long enough now, we can reach back to some of those early CCM songs and give them a fresh coat of paint, also. A few years ago, I had the chance to do a new arrangement of Kurt Kaiser’s famous song from the late 60s, “Pass It On.”  Just this week, I’ve been working on an choral arrangement of the late Rich Mullins’ “If I Stand.” I even got a little bit of that treatment myself a year or so ago, when Selah released a new version of my old hit song, “Jesus Will Still Be There,” originally recorded in the early 1990s by Point of Grace.

So, for you up and coming arrangers reading this: Don’t limit your source material only to songs written in the last twelve months – or even the last twelve years. Grab a hymnal off the pew and go digging. Or search through the big songs of Christian radio from thirty years ago. Find something old and make it new again.