By rsm_nh5hip
Posted December 4, 2015
In Life - Debriefed, On the Job Training, Thank yous, Thoughts on Writing
ON THE JOB TRAINING: “Only Time Will Tell”2015-12-042018-05-10https://www.robertsterlingmusic.com/wp-content/uploads/2018/03/logo-on-black-spaced.jpgRobert Sterling Musichttps://www.robertsterlingmusic.com/wp-content/uploads/2017/05/imagek.jpg200px200px
4

Lessons learned from a life in music.

“I Have Seen the Light” 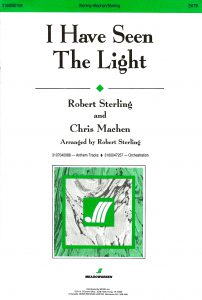 Every year for the past quarter-century or so, when Christmas rolls around, Chris Machen and I are suddenly popular in churches all across America. The reason is “I Have Seen the Light,” a song we wrote together in 1986, that has become something of a standard for a whole lot of church choirs. A big power ballad featuring a male trio, full choir, and orchestra, the song is something of a showstopper. I’ve actually heard from worship pastors, who told me they would be fired if they didn’t use “I Have Seen the Light” in their Christmas program every year. I’m sorry for the burden Chris and I put on these guys, but what can I say? I’m happy the song is popular. It wasn’t always so. In fact, it very nearly disappeared almost as soon as it was published.

“I Have Seen the Light” was released in 1987, one of several new songs in a Christmas cantata, We Beheld His Glory. The publisher, Good Life Publications, was a small but successful evangelical print music company, in the midst of a corporate take-over at that time. As it turned out, the purchasing company was a 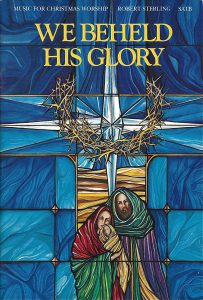 “We Beheld His Glory” Choral Cantata

large publishing conglomerate that didn’t have clue as to how to market music to evangelical churches. Suffice it to say, sales were dismal and two short years later, the cantata, along with “I Have Seen the Light,” was all but forgotten.

True Confession Time: Every songwriter dreams about the perfect recording artist match-ups for their songs. Chris and I are no different. We were sure from the start that “I Have Seen the Light” was a song worthy of Larry Gatlin & the Gatlin Brothers, a Country-Pop trio that was hugely popular in the 1980s. But by 1990, whatever dreams we had for the song had pretty much fizzled and the song had begun to disappear.

But then things began to change.

First – Jim Whitmire, minister of music at Bellevue Baptist Church in Memphis, featured “I Have Seen the Light” in his church’s Christmas program, starting in 1987. (Fortunately for Chris and me, Jim was one of the few to discover “We Beheld His Glory.) Over the next decade, Jim’s influence turned out to be staggering. Churches across the country looked to Bellevue for programming inspiration. Whatever Jim Whitmire did one year, they would do the next. And Jim used “I Have Seen the Light” at Bellevue almost every year for the next seventeen years! 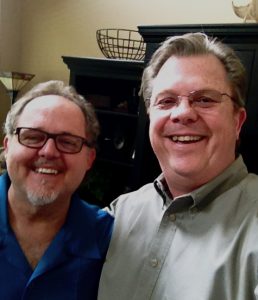 Then in 1991, a fellow named Bruce Cokeroft left his job at Good Life and went to work in Nashville for Meadowgreen Music. Bruce believed Good Life had never given my music the sales effort it deserved. He convinced Meadowgreen Music to license a large part of my Good Life catalog and repackage it as a new choral collection called A Sterling Christmas. Better still, Meadowgreen was distributed by the undisputed king of evangelical print music sales, Word Music. And so, A Sterling Christmas was released in 1992, containing “I Have Seen the Light.”

It wasn’t long before the popularity of “I Have Seen the Light” became evident. A Sterling Christmas sold quite well. Then Word Music released “I Have Seen the Light” as an individual choral anthem, and that sold really, really well. This was all quite impressive, considering the song had never been on an artist recording and had no radio or record promotion. Without both Bruce Cokeroft and Jim Whitmire choosing to champion the song, none of this would have likely happened.

After that, “I Have Seen the Light” began to take on a life of it’s own. It seemed that every Baptist church with a men’s trio was singing it. It became the de facto “Wise Men” song in Christmas pageants and Singing Christmas Tree concerts. Christian college choirs added it to their seasonal repertoire. Slow and steady, it plugged along.

And then – the coolest thing ever happened.

In the early 1990s, I met Steve Gatlin in a Bible study class and we became friends. I told him about “I Have Seen the Light,” and amazingly in 1994, Larry Gatlin & the Gatlin Brothers sang it at the close of their Christmas concert in Myrtle Beach. After that, the song became a staple of the Gatlins’ annual Christmas programs. In 2002, Larry, Steve and Rudy released a Christmas CD featuring the song. Just last night, I again had the pleasure of hearing this iconic American family vocal group bring the house down with “I Have Seen the Light” at the Opryland Hotel.

LESSON #2:
The music business is a relationship business.
Relationships grow from all sorts of encounters.
You just never know who you are going to meet, or where you’re going to meet them. 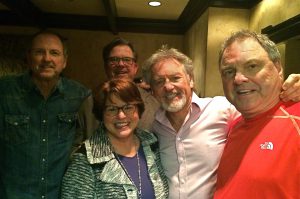 Recently, I did a quick YouTube search and found seven pages of videos of church choirs, men’s trios, university choruses, and recording artists from around the world all singing “I Have Seen the Light.” When we wrote it, Chris and I were just trying to create a song for a slot in a church cantata. Sure, we had the secret hopes of larger success that every writer has for their songs. But no way we ever saw this happening.

LESSON #3:
Songs are like children.
You raise them up, and then they leave and take on a life of their own.
And if you’re lucky, they will help support you in your old age.

So, as Christmas approaches, I thank Larry Gatlin and the Gatlin Brothers for knocking it out of the park every Christmas for the past 20+ years. I could not ask for better musical ambassadors for the song. And thanks also to the music ministers that have programmed “I Have Seen the Light” on this year’s Christmas concert (despite the fact they may have grown weary of the song). Chris and I are indebted to you all, as well as to all the church choirs, college choirs, and performing artists that continue to keep the song alive every Christmas season.