Lessons learned from a life in music.
(#5 in a series of posts)

It was 1995. Michael W. Smith had penned a tune for Point of Grace and it needed lyrics. And the chorus had only twelve notes in it. Assuming one note per syllable, what can one say with only twelve syllables?

In the songwriting business, there is no right or wrong method to create a song, so long as it works. In my forty years of songwriting, I have written songs just about every way one can, and, in my humble opinion, the toughest job in songwriting is to write a well-crafted lyric to an existing melody.

It’s even harder when the chorus of the song has a mere twelve notes. 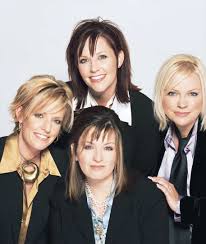 When writing words for a tune that has already been composed, the goal is simple enough: Craft a lyric that fits the tune so well the listener can’t know which came first, the words or the music. Simple. But not easy. Think about it: If I write the lyric first, I get to choose the form, the length of the phrases, and the rhyme scheme. But if I’m writing to someone else’s music, much of that has been pre-determined.

Word Records was building a multi-artist recording called, My Utmost For His Highest. They produced a track of music, written by Michael W. Smith for Point of Grace to sing on the CD. The track needed lyrics.

You read that right: They recorded an entire music track for a song that had no words. What’s more, this was no cheap writer demo. It was the full-blown master track, employing big name session musicians in a top-notch studio. Now this approach is not unusual in the pop songwriting arena, where budgets are higher and the music track is what primarily determines a song’s radio potential. But it was unusual in the CCM world at that time. Personally, I thought they might have acted somewhat in haste, recording the track without any clue as to what the song was about. But seeing as how they were asking me to write lyrics for the song, I kept that opinion to myself.

But wait – there’s more. It turned out, they had already gone through more than a dozen lyrics for the song, penned by some truly talented writers, and none had worked to the satisfaction of the producers.

Okay – so I wasn’t their first call. I wasn’t even their third or fourth call. That stung a little. But again, I kept that to myself, which was no small thing, considering I am not widely known for keeping my mouth shut. I can talk my way out of a winning situation unbelievably fast. But this time I managed to keep both my opinion and my hurt feelings to myself.

LESSON #1:
In the music business, it helps to know when to keep your mouth shut.

Michael’s music track was mellow and laid back. It had three verses (a little unusual), a bridge, and a chorus. A very short chorus. A chorus with only twelve notes. Since the verses had to lead into the chorus, I couldn’t very well tackle the verses until I figured out the chorus. And like I said – it only had twelve notes.

The French painter Henri Matisse once said, “It is only with hard work that I can give the impression of ease and simplicity.” I’ll go on record here: I concur with Henri.

Ultimately, I landed on twelve words that stood as a cogent thought, that could sustain the development of three verses and a bridge, and that could be spun around in the final chorus to a different point of view.

Following the first two verses, the words of the chorus come from God to the singer: I love you so/Won’t let you go/Hold on to me.

In the final chorus, the singer sings a variation to God: I love you so/Don’t let me go/Hold on to me.

Simple enough. Yes. Easy? No way. In fact, the lyric required a couple of days of focused writing and rewriting, much of it spent on those one dozen syllables. If they didn’t work, the song wouldn’t work. Hopefully, the end result sounds like the words were birthed simultaneously with the music. But I must leave that to the listener to decide. My job was to stick with it until the song sounded as if Smitty could have written his tune to my words.

This story has a coda. An executive with the record’s production suggested a change to the lyric – in the bridge, as I recall. What he suggested was, in my opinion, lame. It would have weakened the lyric noticeably. I refused firmly, but as politely as I could. He pointedly asked, “Are you telling me you are willing to walk away from a record that will sell 250,000 copies?” (The project ultimately sold more than 500,000 records.) I told him, “Yes. I am willing to walk away.” The executive backed down. The song was recorded as written. I got lucky. It could have just as easily become another lyric in the project’s trash bin.

LESSON #3
It’s generally wise to be a team player.
But you still have to face yourself in the mirror every morning.