“Love Is the Better Way” from SOUNDS CRAZY.

Several of the songs on Sounds Crazy go back a way. “Love Is the Better Way” reaches back further than most. I wrote its first iteration in the early 1990s. The reason I remember this is because it was almost on the second Point of Grace CD, which we recorded in 1994.  Like I said – almost. 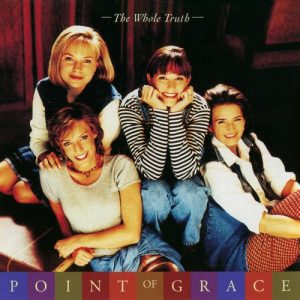 In the summer of 1994, I was tapped to produce the second Point of Grace CD, titled The Whole Truth. Their first recording had already been certified “Gold” by the RIAA (for more than 500,00 units sold), so the scrutiny for songs on the new project was intense. After looking at a couple hundred songs we had chosen all but one, and we had narrowed the options for that final spot to two songs:  “Love Is the Better Way” by Yours Truly, and “Gather at the River” by Joel Lindsey and Regie Hamm.  Songs were chosen by vote: the four members of Point of Grace and the production team. In a moment of almost existential irony, the deciding vote for the last song came down to me. In one of the toughest professional decisions I’ve ever made, I chose “Gather at the River.”

It was the right choice. The song became a huge hit for Point of Grace. Christian radio loved the song. There was joy all around. And “Love Is the Better Way” was put quietly away in my song file to be pitched occasionally, yet never chosen.

Still, I believed in the song. I knew it was a good song. In fact, the executive producer for Point of Grace once told me he thought the first verse was as good as any song verse he’d ever seen.  Over the years, I revisited it more than once, making tiny changes in the tune, the harmonies, and even the overall feel of the song. Then in 2015, Luke Garrett chose it for his new CD.

I went in to the studio with a top-notch band and my favorite recording engineer (Doug Sarrett), and we recorded a lovely, somewhat melancholy instrumental track.  Later, in June of 2016, only days before we were scheduled to record the lead vocals, Luke tragically succumbed to a sudden heart attack. “Love Is the Better Way” was again set aside, along with seven other tracks recorded for Luke’s project.

Three years later, when I began to seriously consider what songs might appear on my own project, “Love Is the Better Way” came back into consideration. Amazingly, when I played the track from Luke’s unfinished project, I discovered it was in a key that fit my limited vocal range. (This really is amazing when you consider that Luke was a thoroughbred tenor.)  And while it’s straightforward message and its hauntingly acoustic track make it something of an outlier on a project of songs laced with lyric irony and jazz-fusion musical influences, the song served to become the project’s all-important “statement of faith.” It reminds us that life is difficult, but Believers have Jesus as the ultimate example that a life of sacrificial love is always the better path to choose.

WE WALK A ROAD OF HOPES AND FEARS –
A PATH THAT BUILDS AND BREAKS OUR DREAMS.
IT’S SMOOTHED BY LAUGHTER, WET WITH TEARS,
AND OFTEN STEEPER THAN IT SEEMS.
AND WHEN THE ROAD AHEAD DIVIDES,
THE MOMENT WHEN THE HEART DECIDES,
REMEMBER…

HE WALKED A ROAD OF HATE AND DEATH –
THE ONLY WAY TO LOVE AND LIFE.
WE STOLE AN INNOCENT’S LAST BREATH
WHEN JESUS PAID THE FINAL PRICE.
AND AS HE GAVE ALL HE COULD GIVE
HE TAUGHT US ALL HOW WE SHOULD LIVE.
HE SHOWED US HOW TO LIVE.
HE SHOWED US…

If there is a lesson in this for my fellow songwriters, it might be this: Don’t give up on a good song. It might take longer than you like, but in time it may find its way in this world.

The tracks were recorded by my friend, Doug Sarrett, at the now (sadly) defunct Tracking Room in Nashville. The band consisted of Craig Nelson (bass), Aaron Sterling (drums), Mark Baldwin (guitars), and David Hamilton (keyboards). A stellar crew if ever there was one.

I recorded my vocal tracks at home, along with the additional harmonies sung by my lovely wife, Cindy.

John Mayfield mastered the recording. He’s one of my oldest professional friends, and one of the country’s finest mastering engineers.

“Love Is the Better Way” is available here at the website on my solo CD Sounds Crazy. You can check it out on YouTube here.