“Leaving Us to Say Goodbye”
(words & music by Robert Sterling)

The unexpected death of a friend lands like a body blow. It leaves you stunned, even speechless. You receive the bad news and go numb. Hearing of Luke Garrett’s fatal heart attack five years ago hit me like that. He and I were finishing a new CD together. We were scheduled to record his final vocal tracks only days later. Then his brother called, who sounds exactly like Luke on the phone. It was as if I was hearing the awful news from Luke himself.

So, how does one process that kind of grief or emotion?

Though I am a lifelong songwriter, I don’t often express those things openly in my writing. A professional counselor would say I bottle those things up, and she would be right. But this time – with Luke’s death – it felt different. In the days immediately following his death, I listened to the four tracks we had completed and was overcome by the realization he and I would never create together again. It was all so unfinished. Then a lyric began to emerge. From where, I can’t tell you.

Surprised that you would leave so soon.
We turned around and you were gone.
Without you here to sing the tune
The melody was missing from our song.
For now we can only try
To understand the reason why you went away,
Leaving us to say, “Goodbye.”

And the words poured out pretty quickly: An AABA song that explored the emptiness from an unexpected loss without the opportunity to say goodbye.  I think I finished the entire lyric in a day, and I made minor changes over the course of the following two days. At the time I didn’t feel up to writing the music, and I asked another friend of Luke’s if he was interested in collaborating. He wasn’t. He didn’t explain why, and I didn’t ask. I elected to tackle the music myself.

There is a stereotype that says sad songs should be in a minor key. But the music for “Leaving Us” is wistful, in a major key, accompanied by major 7th chords. I made a simple piano/vocal demo and shared it with a few of Luke’s friends and family. Writing became my grief therapy. I never expected anything to come of the song beyond that. Some time later, we released an EP/download of Luke’s final four recordings along with my humble tribute song to him. (You can see that project here.) We called the project “Leaving us to Say Goodbye.” And that was that.

Or so I thought. 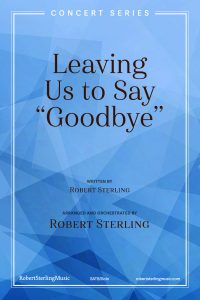 Two years later, my little sister, Lisa, died fairly suddenly from an unexpected cause. And “Leaving Us” became a part of her memorial. A year after that, it was the concluding song on my own CD release, “Sounds Crazy.” Then last year it seemed we were were all losing friends and family, young and old alike, to that despicable COVID virus. And it dawned on me that it has been ever thus, and always will be. Few of us make it through this life without experiencing such a loss.

So, for my most recent choral release, I did a setting of “Leaving Us” for SATB choir and  soloist. My hope is that this anthem might provide a moment of solace for those inevitable times when we grieve together over unexpected losses. Such grief can be particularly devastating for young people, and so I’ve aimed the new arrangement at the school/community choir market. (You can listen to it here.)

When we recorded the choir and soloist a month or so ago, the singers were all very complimentary and moved by the song. Normally such a response would have made me proud. This time, though, it reminded me of Lisa and Luke, who left this world without me getting to say goodbye. I suppose I’ll have to let the song do that for me.