I haven’t published a new choral book in a decade. For one thing, I don’t know what I could possibly add to the mountain of cantatas, choral collections, and musicals that is already out there. For another thing, nobody has asked. But from 1987 through 2011, I arranged, orchestrated, wrote the songs, and produced the demo recordings for about seventy (70) choral books. And about 20% of them were Christmas works. Most are long out of print. Interestingly enough, I still receive inquiries every year about some of these products – even the very oldest of them. So, I thought it would be fun present my own Twelve Choral Books of Christmas.  This isn’t all of my Christmas music, mind you. But these are some of the more significant titles to me. 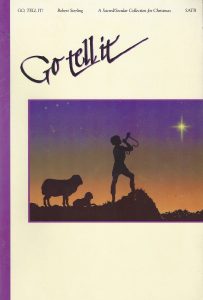 This is my first ever choral collection for adult choirs, thanks to the late, great Dan Burgess. I am forever grateful to him for the opportunity. Created for the popular “Singing Christmas Tree” concert format, half the book is secular music and half is sacred. This collection notably contains an arrangement of “The Little Drummer Boy,” which became a very popular anthem over time. This book has held up well over the years because the arrangements weren’t trendy, but they were very “Christmas-y.” 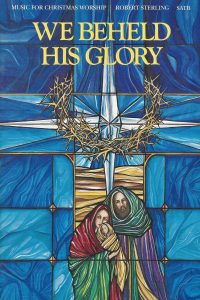 WE BEHELD HIS GLORY (GoodLife Publications – 1988)

Now this book was my first actual cantata, which meant the songs needed to connect and follow a narrative – something that was brand new to me. So, not only was I arranging, but I was also writing narrations. I chose to stick with scripture – a safe play, right?

What makes this book significant is that it contains the first appearance of “I Have Seen the Light,” written by Chris Machen and me. While the book itself was pretty quickly forgotten, that song went on to become something of a perennial Christmas favorite. It is still being sung in Christmas concerts every year. 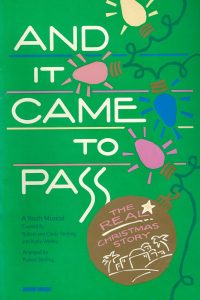 Through the 1990s, I was the exclusive arranger of youth choir music for Word Music. AND IT CAME TO PASS was the first of many original scripted musicals I would write for the company. I created it along with my wife, Cindy, and our dear friend, Karla Worley.

It tells the Christmas story through the eyes of a zany teen-ager named Zack Zewicky. This musical was a blast to create. It was even more fun to record because the demo featured a very young Scott Williamson and my eleven year-old son, Aaron in the two lead roles. Today, those two are a couple of the most formidable studio drummers in America. 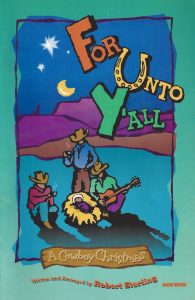 This is the little Christmas musical that refused to disappear. Word Music took a real chance releasing it – because it re-tells the Christmas story set in the Wild West. And in 1992, that was a potentially controversial and irreverent thing to do. (I know of at least one music minister who was fired for producing the show at his church.) Thankfully, a lot of people chose to love it. And while it was written for youth choirs, it ended being performed by children’s groups, youth groups, adults, and senior adults. It was a church favorite for years, and found its way into community theaters and dinner theaters. Twenty years later, I released an extended theatrical version (available here at the website), and the show continues to be performed nearly three decades after it was first written.

The show features original music, all written in popular Country & Western styles, by Bruce Carroll, John Mays, and myself. 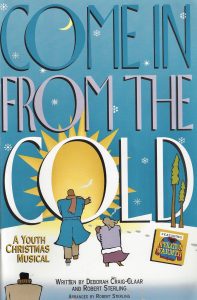 More of a musical revue, COME IN FROM THE COLD is one of my earliest collaborations with Deborah Craig-Claar. Aimed at youth choirs, the script features several comedy sketches by Deborah.  (Apparently adult choirs weren’t allowed to be funny.) This was one of the earliest church musicals that had original songs crafted to work within and around a comedy sketch. And that is all thanks to Deborah. The most notable of these was a crazy bit she wrote called “The Christmas Season, Cough ‘n’ Sneezin’ Blues.”

Deborah and I continued to write together on many more projects, but this one is certainly the silliest – and that’s a compliment to her. 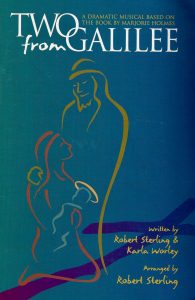 Based on the popular novel by Marjorie Holmes, TWO FROM GALILEE was a groundbreaking work in the church music world. At the time, conventional wisdom held that churches wouldn’t do a musical that ran for longer than an hour (so they could be performed in a traditional worship service). TWO FROM GALILEE broke that rule, running almost 100 minutes in two acts. It is a serious work with all original music, requiring the talents of eight strong leading characters, along with a large supporting cast.

I wrote this with Karla Worley, and she gets the credit for converting a lot of my original script into lyrics. The show has been performed all around the world, and contains a couple of the best melodies I’ve ever written (imho). That said, I would jump at the opportunity to re-write this musical because – it’s not long enough! Karla and I both knew from the outset we were pushing the church music publishing envelope, and we had to skip over a handful of places in the script we believed should be expanded and musicalized. That said, this musical remains a favorite of mine. 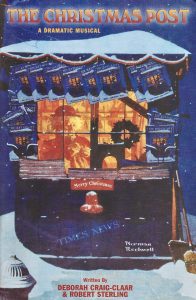 This is the wonderful Christmas comedy that broke Word Music of the practice of creating scripted dramatic musicals – because after this work they never released another such book. And that’s sad, because THE CHRISTMAS POST is fun, clever, and still quite popular still with musical theater folks.

The work is a collaboration with Deborah Craig-Claar, who gets full credit for the very creative concept (based on Norman Rockwell paintings) and the equally clever script. The music is pure “show music” and features a classic Broadway pit orchestra sound.

Years later, Deborah and I expanded the show, adding three new songs. (That’s right, back then all our church musicals were too short – and needed more music. But again, we were testing the limits of what was allowed.) Those new songs can be obtained here at my website for those who want to revive their production of the show with some fresh music. 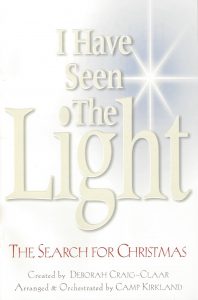 I didn’t actually create this cantata. It was the brain-child of Deborah Craig-Claar, and features the arrangements of Camp Kirkland. But – I did write the title song along with four brand new songs specifically for the choral book. And because it was one of the biggest-selling cantatas EVER, it payed a lot of bills for me in the yeas following its release. So, I claim it as a sort of step-child of mine.

For the record, it sold over 100,000 copies in its first two years, and it may well be the best example of what really worked in the evangelical choir world of the 1990s. 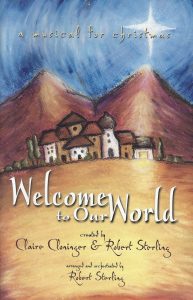 It would be no stretch to declare the late Claire Cloninger to be the queen of the contemporary church cantata. During her long run as a songwriter for Word Music, she was responsible for dozens of Christmas, Easter, and non-seasonal works. I was privileged to create several of these with her, and WELCOME TO OUR WORLD was our first Christmas collaboration. The title/anchor song is the popular Chris Rice tune. The cantata contains familiar carols, as well as original songs Claire and I wrote for the book.

Claire was a dear and remarkably talented woman, and she is still missed. Of all the pure cantatas I ever wrote, this one has held up as well as any has over the years. 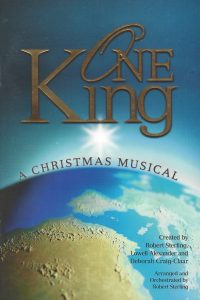 ONE KING is significant to me mostly because it cemented a friendship and a co-writing relationship with one of the best songwriters I’ve ever known – Lowell Alexander. At the time, Lowell and I had only written one song together. But he knew how to write songs for the church choir, and I knew how to arrange and produce that music.

The title song, “One King,” had been released by the popular vocal group, Point of Grace, and I had already done a choral arrangement of it. It was then Lowell’s idea to use “One King” to anchor a cantata. So, he and I spent several weeks one summer writing new songs to fill out such a work. Later, Deborah Craig-Claar was brought in to help us finish it up. The choral book was a significant success. But my friendship with Lowell was the most lasting benefit from this work for me. 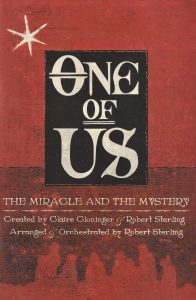 ONE OF US was my last big collaboration with Claire Cloninger. In many ways it was a follow-up to WELCOME TO OUR WORLD – featuring another title song by Chris Rice, and new material by Claire and me. It also contains my arrangement of “Peace,” written by Michael McDonald – whom I had followed as a songwriter for years.

Claire and I co-wrote some individual songs in the years that followed, but we never again worked together on a big choral project. If someone had told us in 2004, thatONE OF US  would be our final big collaboration, I think it would have stunned us both. 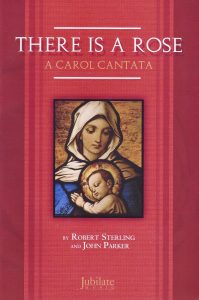 This was my last cantata – or mini-cantata, to be more accurate. While every musical I had written before tended to run longer than 50 minutes, this work can be performed in only 30 minutes.

In 2011, I was long out of my exclusive contract with Word Music, and writing more for the traditional choral market. THERE IS A ROSE was created by John Parker and myself, aimed at smaller churches that preferred traditional choral music and live performances (with no performance tracks). The work features an Intrada and four brief suites, all connected with narrative interludes.

What sets this little cantata apart from my previous works is that it is scored for piano and an optional small chamber ensemble – made up of instruments typically available to most churches: flute, oboe, horn, cello, handbells, and a percussionist. In a lot of ways, this may well be the most practical cantata I ever wrote for true live performances.

So there are my Twelve Choral Books of Christmas. If you ever sang one of these, I thank you. You helped put my kids through college.