I recently read John Suchet’s biography of Beethoven (“Beethoven: The Man Revealed”).  I recommend it to anyone who might want to take a peek into the life and mind of one of the greatest composers of all time. 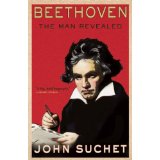 It is difficult to read about Beethoven and not be struck at just how average one’s own life is. But that’s okay. I have come to grips with the fact that I will never be considered a musical genius by any serious person. Still, I have managed to make a living creating music for a long time. A very looong time. (I am 232 years old in Musician Years.) And by most measures in the music world, that makes me some kind of success.

So, what is the secret ingredient to success in music? Talent? Education?

I am moderately talented. Certainly no prodigy. Sure, I thought I was awesome when I was young and foolish. But then I heard a real prodigy play as a freshman in college, and that set me straight real fast. The results of my work, however good they might have been, rarely came easily for me, as it seemed to for so many others. In my case, talent helped, but was never the key. (Pardon the music pun.)

My formal music education was pretty minimal by any rigorous standard. I took a couple years of piano as a child. I fell in love with the drums at age twelve, and practiced relentlessly for the next decade or so, with little focused teaching. I took a music theory class in high school. In college, rather than study composition, I studied music education. (A colossal waste of time and money for a person wanting to write music for a living.)

Whatever success I have achieved came mostly from hard work. Anything I learned beyond the basics of music theory, I picked up along the way. I read books. I asked questions. I paid attention. I listened. I watched. But mostly, I worked at it. Nearly 40 years later, I am still working at it. I am currently in the middle of orchestrating 20+ songs for a musical. And I am learning new stuff every day, it seems.

And I don’t think my story is all that unique.

What does this have to do with Beethoven? Well, he was supremely talented, yes. And by today’s measures, he also had a first-rate music education. But to ignore how hard the man worked would be an injustice to his legacy. He toiled at his craft relentlessly. He was an infamous re-writer, known to have multiple music copyists on hand only hours before a major musical premier in order to make his last-minute changes. This undisputed master of music took his job very seriously, and we today are immensely grateful he did.

So, should you not be the most talented, or the best educated musician in your town, or class, or church, take heart. Hard work and focused effort might just bridge the road to success.