About twenty years ago, I had a conversation with the late Grant Cunningham, a superb lyricist, about the struggle of Christian songwriters to meld the three ideal elements of a successful Christian song: Art (creativity), Money (commerce), and Jesus (theology). As we chatted, a Venn diagram emerged, which I’ll show you in a moment. But first, here is where the diagram came from…

Any songwriter/composer chasing only the creative impulse is free to focus entirely on Art: pure creativity with no restrictions. You want to write a song with a 32-bar jazz piccolo solo? Go for it! How about a word-for-word setting of War and Peace – in Russian? It’s art!  A Concerto for Trombone and Triangle? Sure, why not! The Art target is wide open and welcoming. You may never make a penny from your efforts, but nobody can tell you what to write. But… 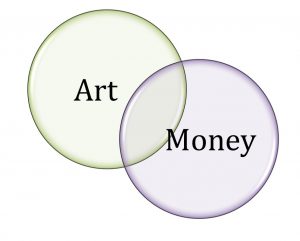 The moment you decide it would be nice to make money from your creative efforts, you have to concern yourself with the marketplace. What do people want to hear? What is popular? What will sell?  This is where every creative person inevitably discovers the demands of Money tend to trump the freedom of Art. And our target, the place where Art and Commerce overlap, shrinks considerably. By the way, I don’t mean to imply this is a Bad Thing. It is simply a reality.

Enter the Christian songwriter, who, unlike all other songwriters, must add a third layer: Jesus (theology). If there is a natural tension between Art and Commerce (and there is), an even greater strain pulls at Jesus and Commerce. (Just think of all the times in the four Gospels Jesus spoke about the inherent dangers of money.) As a result, the target for the Christian songwriter/composer gets smaller still.

Here is the basic diagram that Grant and I came up with that day. 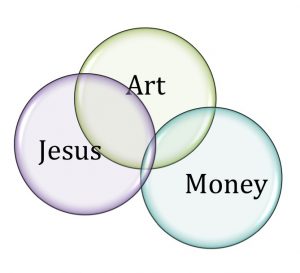 The tiniest target in the diagram, where Art, Money, and Jesus all overlap, is the spot Christian songwriters have to aim if they hope to be creative, remain faithful to good theology, and still make money. It is no easy task.

My own success rate at hitting that tiny target has been okay, I suppose. I’ve had my share of hits on the radio, thanks to successful marketing as much as anything, I suspect. I’ve also written music that has enjoyed “critical” acclaim. (For the record, critical acclaim doesn’t pay as well.) Through it all, I’ve tried tried to maintain solid theology in my writing. When I’ve missed that target it was probably because I was either ill-informed, or I turned the creativity knob a little too far.

I’ve never met a songwriter who didn’t desire success in the marketplace. Christian songwriters are no different. The danger for we Christian songwriters comes when the marketplace drives us more than does creativity, or even theology. Christian radio stations, record companies, and publishers are in the business of making money. So they understandably value songs that rise to the top of the radio and sales charts.  The Church (another marketplace, if we are being honest with ourselves) is susceptible to gravitate toward songs sitting atop the CCLI popularity chart. But success in the marketplace is not an indicator of the quality of a song or the Truth of a song.

The quality and depth of our creativity and theology wouldn’t matter if we weren’t writing Christian songs. But we are. Let’s not forget that as we take aim at our next target.