If something sits around my house for very long without being used, it is in real danger of being donated to charity or taken to the dump. My wife is so quick to rid our home of the idle stuff that manages to magically accumulate around here that one of our daughters-in-law dubbed her “The Deletist.”

“Honey, where is the blender?“ I might ask. “That old thing?” she would reply. “We hadn’t used it for a year.” And that was the last anyone saw of the blender.

The folks at Goodwill love my wife. Needless to say, I make every effort to remain useful, lest I find myself sitting on the curb waiting for the trash truck to haul me away.

I’m okay with Cindy’s “use it or lose it” approach. I never cared for clutter, though, as I write this, my desk belies that. But when it comes to old songs, scraps of lyrics, and unfinished melodies, I say hang onto them forever, if need be. Because you just never know when they might come in handy.

It is Standard Operating Procedure for every professional songwriter I know to recycle unused material. We will pick clean the bones of an unused song, like a Christmas turkey, if it suits our current purposes. If Artist A passes on a tune, maybe Artist B will like that same melody with a different lyric. If Acme Music isn’t interested in your songs, perhaps Zenith Publishing across the street will sign your lyrics, so long as they are set to music by one of their writers. Or maybe you’re struggling to finish the 2nd verse of a new sure-fire hit when you remember a certain couplet from an unused lyric that would fit perfectly. Problem solved.

Recently I was reminded of this buzzard-like propensity we writers have toward songs that we once loved dearly, when they were shiny and new, but which now serve as replacement parts for newer and shinier songs. Deborah Craig-Claar, a longtime collaborator, wrote to tell me she had scavenged a handful of lyrics from a song she and I had written years ago that failed to be placed in a musical. But that particular song was built with a tune I had scavenged from a previous attempt in yet another musical, with lyrics by another writer. Those original lyrics were married to yet another tune by someone else. As for my tune, I later wrote a new lyric and placed it on a children’s recording.

If you need a score card to keep up, here’s the recap (this time with names and dates):

In 1988, I wrote a melody to a Claire Cloninger lyric, titled “Deck the Mall,” for a youth musical. My melody was rejected in favor of someone else’s tune.

Several years later, Deborah Craig-Claar wrote new words to my “Deck the Mall” tune for a different musical. That song, called “Winter’s on the Way,” was also rejected. (I’m detecting a pattern.)

Deborah later robbed some of her “Winter’s on the Way” lyric and used it in a song called “Whenever It’s Christmas,” written with Chris Machen in 1995. 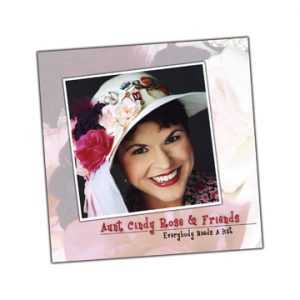 Aunt Cindy Rose: AKA “The Deletist”

Then in 2004, I wrote new lyrics for my “Deck the Mall” melody for a children’s record, calling the song “Once Upon a Time.” (Ironically, that children’s record featured none other than my wife, the Deletist herself, singing under the name Aunt Cindy Rose.)

Finally, in 2014, Deborah took the remaining remnant of her “Winter’s on the Way” lyric and reworked it into a new song called “Cold Snap,” written with Mark Hayes, for children’s show choirs.

Had either Deborah or I been sentimental saps, unwilling to part with our original “inspired” work, we would still be the proud owners of a couple of unused songs. But because the source material was solid, and we were willing to re-work it, it ultimately found a home. Several homes, in fact. It just took nearly twenty years for that to happen.

Don’t get me wrong: I’m as fond of my old work as the next songwriter. But I’m not going to pass up the opportunity for a cut on a record because an old song in my file cabinet is too near-and-dear to my heart to be re-written to suit a different need.

And that reminds me: I probably ought to go back through my “songs in progress” file and see if there’s anything hiding there that’s worth another look. You never know…