Robert Sterling’s For Unto Y’All is a delightful gospel musical based on the Biblical Nativity story…
In this version, however, whilst the characters’ and town names remain the same
(Joseph, Mary, Bethlehem, Nazareth) we are in Wyoming in the mid-West of USA in 1880.
(Tony Knight, “Stage Whispers,” Adelaide, Australia)

And so begins the solidly positive review by Tony Knight, theater critic for Stage Whispers (online), of the recent run of FOR UNTO Y’ALL in Adelaide, Australia. The show ran not as a Christmas presentation, but as part of the Adelaide Fringe Theater Series, in February and March, 2019. You can read the full review here.

I’m going out on a limb to say that in the relatively limited world of Christian musical theater, FOR UNTO Y’ALL may be the most unique show ever, and certainly the one with the most unique history. 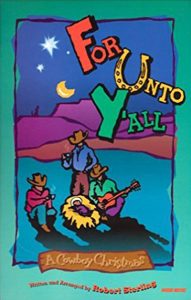 Originally released in 1992 by Word Music, FOR UNTO Y’ALL  was as a tenderly humorous version of the Christmas Story aimed at youth choirs. The music score featured a set of new songs, all done in a Country & Western sound. The show was a quiet success, but over time it became the “show that would not die.” Year after year, it was staged, not only by youth groups, but by children’s choirs, senior adult groups, church drama ministries, and even by community theaters.

As it turned out, people of all ages enjoyed playing cowboy.

With a running time of about 45 minutes, the original show was short. Too short, in fact, to be a real show. From the very beginning, I thought that with some additional characters and songs, FOR UNTO Y’ALL could become a genuine musical theater presentation.  In 1999, an attempt was made by Word Music to expand the show to a full-length musical theater piece, but without success. Almost a  decade later, with zero prospects of it ever being staged, I took it upon myself to rewrite the show. I wrote new songs and and rewrote old songs, created new characters with new dialogue, inserted new scenes and reconstructed old ones. By 2008, I had a new show.  But until I had a professional recording of the music score, there was no effective way to share the show with potential producers.

And then came an email from Howard and Sharon Raymond, of Adelaide, Australia. They were looking for a new show, and they really liked FOR UNTO Y’ALL.  But it was too short, they wrote me.

“Have you ever considered expanding the show?”

“Funny you should ask,” I answered.

Fast forward to the spring of 2013, and I was in a Nashville recording studio with top-notch session musicians and singers, producing the full score of the freshly re-written FOR UNTO Y’ALL, thanks to the vision and generosity of the Raymond’s. The Raymonds successfully produced the premier of the new show in December, 2013, featuring performers from their Soul Factor Gospel Choir.  The show Mr. Knight recently reviewed was the Raymonds’ most recent production of FOR UNTO Y’ALL.

Thanks to the Raymonds and Word Music, the new version has been available as licensed-production here at RobertSterlingMusic.com for the past five years.  And every year, several churches and community theaters have rediscovered this little musical theater gem, to the delight of their Christmas audiences.

While it may seem odd that I bring up a Christmas show in May, anybody in the church music world or the theater world knows that now is the time to choose Christmas material. So, for those who might be looking for a one-of-a-kind Christmas presentation, with a lot of warmth and humor, and a genuinely fun score, might I suggest FOR UNTO Y’ALL?

You’ll find info about the new show here, along with testimonials from some of those who have staged the production.

Here is a brief video demo, with snippets of the music and a photo montage from the Raymonds’ original stage production.

And here is a link to download a Perusal Script and a set of song demos, should you want to dive deeper into the show itself.

So, if it feels a little odd to be reading about a Christmas show when the world outside is warm and in bloom, let me end this shameless plug of a blog with Mr. Knight’s concluding remarks:

For Unto Y’All is really a Christmas show,
but what a treat to have the joyous Christmas spirit around at this time of the year.