By Robert Sterling
Posted May 28, 2017
In Random Neural Firings, Thoughts on Writing
Return of the Patron2017-05-282018-04-05https://www.robertsterlingmusic.com/wp-content/uploads/2018/03/logo-on-black-spaced.jpgRobert Sterling Musichttps://www.robertsterlingmusic.com/wp-content/uploads/2017/05/imagek.jpg200px200px
20 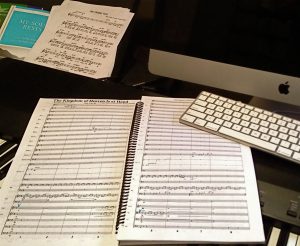 (* Numbers based entirely on personal experience and anecdotal conversations with fellow professionals, none of whom will admit to any of this under oath.)

In the not-so-distant past, our 100+ year old system of royalties paid on the sales of printed music could actually support a church composer. You weren’t likely to become rich, but you could make a living writing music. I know this to be a fact because I did exactly that for nearly twenty years.

Not so much any more.

As you can see from the totally non-scientific numbers above, the sales of church choral music have plummeted by as much as 90% in the past couple of decades. (The reasons for this are myriad, and I won’t go into them here.) I don’t know about you, but a 90% cut in pay was a hard thing to absorb at my house. I’m fortunate to have a large back catalog that still sells, plus some producer royalties from old artist records. Plus, I work on independent projects (including my own).  So, I’ve survived.  But off the top of my head, I can name a half-dozen award-winning Christian songwriters and arrangers who have gone on to other creative ventures because they could no longer support themselves writing for the CCM/church music world. Frankly, that doesn’t bode well for the future of sacred music.

So, what can be done? Assuming one believes there is still a need for well-crafted sacred music for choirs, orchestras, soloists, and even musical theater programs: How can the most talented creators of such music be convinced to stick with it when the old system has failed them?

Prior to the early 1900s, most composers of every stripe survived with the support of a patron. Patronage sometimes came in the form of a steady composing gig for the king, or as high-paying commissions from the wealthy.  It was only with the technological advances of the 20th century (affordable sheet music, the radio, the phonograph, television, movies) that a popular songwriter/composer could conceivably make a living from the sales of his music. It may look a little different this time around, but I believe we are returning to such a time (if we are not already there).

Why do I think this?

1) For the last ten years, the bulk of my income was no longer from royalties, but from three churches: First Baptist Church Dallas, Brightmoor Christian Church (Novi, MI) and Christian Life Assembly (Camp Hill, PA).  They hired me to write shows, film scores, choral arrangements, and broadcast radio/TV themes.  Only two days ago, I completed a month-long commission for Youth CUE (San Antonio, TX) to be premiered this fall with the San Antonio Symphony.  In effect, these churches and organizations have been my patrons. Yes, they hired me to do contract work, but what is commission if not a sort of patronage? They like what I write and paid me to write specifically for them.

2) Similarly, for some time now large churches have been hiring arrangers on staff to write for the church’s specific need. This, too, is a sort of patronage. More significant are those churches that bring in a Resident Composer, not so much to write only for the needs of that church, but to write what God leads her to write.

3) More common today is the individual patron who offers support to an artist to complete a specific project, whether it be a recording or a cantata. In these crowdfunding scenarios every donor to the campaign is a patron. If you believe in a Christian composer’s work, this can be a terrific way to support the composer.

I also believe there is a need for individuals whom God has blessed with wealth and a love for the arts to step forward and financially enable composers to write quality music for the church – without concern about sales on the mass market or a return on investment.  Such patrons have long supported classical music and the fine arts. I think perhaps their time has come in church music, as well.

I’ve touched on some of these ideas in previous blogs. But from things I’ve read recently, along with almost-daily conversations I have with talented, dedicated Believers, I thought it was time to raise the subject once again. If you are a composer/arranger struggling to survive while writing for the Church, you have my prayers and concerns and very best wishes. Maybe you can share this blog with someone in the position to become your patron.

And if you are a lover of good church music with the means to do so, perhaps it’s time to support that music in whatever way you can.

I hope this will generate a reasoned conversation. Leave your comments and I promise to respond as best I can!