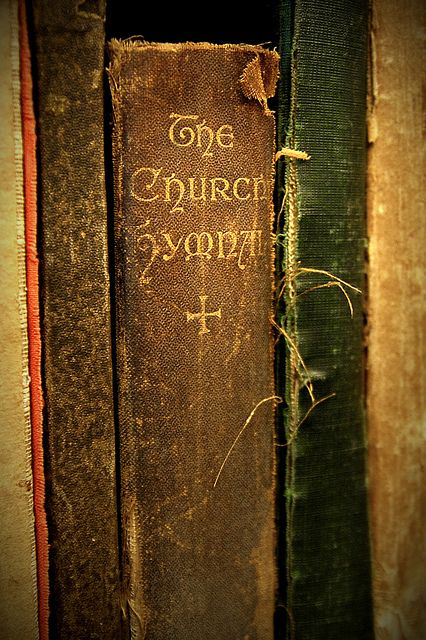 It’s always interesting to see a young person discover something old, and think that it’s new.

I remember when my younger son, who was about fifteen at the time, came to me and said, “Dad, I just heard this awesome CD by a band called Weather Report.  For those of you who are not aficionados, Weather Report was one of the most influential instrumental jazz/fusion groups of the 1970s and 1980s.  But my son didn’t know that. He only knew he had “discovered” this group.  (This was also the moment I realized he had really good musical taste.)

Similarly, there is an encouraging rediscovery of hymns occurring amongst younger church musicians, who were raised on Praise & Worship songs with little awareness of classic hymnody. Great music has a way of being rediscovered in time. And the next generation is responding to the depth and truth in ancient gems such as “A Mighty Fortress,” “All Hail the Power of Jesus’ Name,” and “Immortal, Invisible, God Only Wise.”

Not surprisingly, this generation is responding to these hymns differently than did my generation. Not only are they embracing the hymns, but they are adapting them to suit their own musical milieu. Tunes that were always sung in four-part harmony to the accompaniment of a pipe organ are now being sung in unison or two-parts, backed up by a pop band. I’m not here to argue the pros and cons of those two approaches.  I figure it’s a good thing when people sing classic hymns, regardless the style of the accompaniment.

Now, much to the surprise of the kids discovering these hymns, they are far from the first to “modernize” these old worship warhorses.  Choral arrangers have been rearranging hymns, often in pop styles, for decades.  My first two choral publications, released nearly forty years ago, were jazz/pop arrangements of “Swing Low, Sweet Chariot” and “Savior, Like a Shepherd Lead Us.”  (And I certainly did not invent the idea of arranging old hymns in contemporary styles.) But arrangements of that sort are done for performance by a choir or ensemble, as opposed to congregational singing, which is what I want to touch on in this blog.

A lot of you readers are involved in local church music ministries – playing in the Praise Band, or singing in the vocal ensemble, or leading the music. You may be actively involved in bringing hymns back into your church. If such responsibilities are falling on your shoulders, you might be wondering if there are logical, do-able steps to “modernize” a hymn effectively for congregational worship.

Why, yes. There are such steps.  And I’m offering them to you today at the amazingly low price of FREE! Just call this 800 number… No. wait.  Just keep reading.

Just please keep this in mind: These guidelines are about creating a successful congregational hymn singing experience – not to make your worship team look like rock stars.  So, here we go…

1. Pick a key suitable to the majority of the singers in the congregation.  This seems obvious, but it’s amazing how many kids get this wrong when they do their latest version of “Come, Thou Fount of Every Blessing.” Too often, they choose the key that suits the 1st tenor Worship Leader, rather than all the bathroom baritones and 2nd sopranos in the congregation. Generally, this means placing the melody in the 10th between B-flat 2 and D3.

2. Keep it simple.  Find an accompaniment rhythm pattern and tempo for the band that allows the melody to be sung freely and naturally. Avoid forcing unnecessary syncopation and “push beats” on to the tune. Even if you are copping the version of a hymn done by a hip worship artist, you don’t have to subject your congregation to those difficult rhythms.  Complex rhythms that are easy for a soloist or small group generally become an intelligible mush when sung by large assemblies of untrained voices. The goal is not to be hip or cool, but for the congregation to be able to sing the hymn.

3. Re-harmonize the melody for a pop rhythm section. Ninety-nine percent of the time, this means simplifying the traditional harmonies found in the hymnal – often significantly.  A lot of traditional hymns change chord structure on every beat of the bar. As a rule, you don’t want more than two chord changes in a bar. One per bar is better.  One every two bars is great.  The main things is you don’t want it to sound “busy.”

Rhythm sections operate best when they are playing a groove.  The less harmonic movement, the better they can keep the groove.  As a rule when writing a pop rhythm chart: Less is more.

FYI – Experienced rhythm players will automatically interpret chord changes in a way suitable for the style of the groove.  They may instinctively add a 2nd to a chord when it’s appropriate.  Or they may omit the 3rd of a major chord. You can spell these changes out for them.  But chances are they will make those interpretations on their own.

4.  Write it down.  Don’t teach your new version of “Amazing Grace” to your band and worship leaders by rote.  Somebody will surely forget the changes, or miss a repeat, of go to the Coda too soon. With it written down, everyone is literally on the same page and communication will be much clearer.  Also, written music sends a signal to the musicians that there is a road map that they all must follow.  Congregational worship is not the time for free-form bass solos.

I recommend using scoring software such as Finale, Sibelius, or Dorico to create a clean, uncluttered lead sheet and/or chord chart for everyone to follow. It may be helpful to include the words & melody out for your choir/ensemble, including any simple harmonies you want to be sung.  Typically, all the band will need is a chord chart.

5. Make the chart easy to read. Don’t try to stuff it all onto a single page. Some of the players may be positioned several feet away from their chart.  Singers may be glancing over someone’s shoulder to a music stand.  If you’ve crammed five or six measures on every stave, it’s easy for musicians to lose their place. Paper is cheap. (PDFs on iPads are even cheaper.) Uncrowded music is easier for everybody to read.

So that’s it.  It’s really not any harder than that. Whether you are writing the charts yourself, or handing the job over to member of the Praise Team, these five guidelines will hopefully prove helpful.  But no matter what, don’t forget: It’s all about the congregation.