Lessons learned from a life in music.
(The first in a series of posts.)

When setting out on any new endeavor, a little help from an experienced hand can make a big difference. In the beginning, the smallest kindness from a friendly pro might keep the creative fire lit for another day.

More than once, I benefitted from such help as I began my music career. I was fortunate to encounter several people generous with their knowledge and advice, some who even offered modest free-lance employment at a time when a hundred bucks for music copy work meant Cindy and I could pay the monthly rent.

One of those people was Kurt Kaiser.

Before I ever met Kurt, he loomed large to me. My mother was a Kurt Kaiser fan. On Sunday mornings, Kurt’s piano recordings accompanied our family’s preparations for church. As a high school sophomore, I played drums for a citywide concert of the hot new youth musical, TELL IT LIKE IT IS, written by Ralph Carmichael and Kurt Kaiser. From that musical came the hit song, “Pass It On,” sung by every youth group that ever gathered around a campfire in the 1970s.

Four years later, I met Kurt in the college Sunday school class at Seventh & James Baptist Church. That morning he sat at the piano and taught us a song he had just written. The song was “Oh, How He Loves You and Me.”

A couple years after that, I was doing free-lance editing for Word Music. Kurt needed somebody to do last minute music copy work and occasionally schlepp the copies to the studio for the next day’s work. I was the man for the job. The antiquated process of copying music by hand was tedious work. But it paid the bills, and I learned about scoring by copying the work of more experienced writers.

Lesson #1: Even the smallest job is an opportunity to learn.

Then, in 1979, Kurt did one of the kindest, most generous things anybody has ever done for me. On a frigid Saturday in February, he spent several hours at 1st Baptist Church Waco, accompanying my mother singing her favorite hymns. From then on, I knew two things: I would forever be Mom’s favorite, and I would always be in Kurt Kaiser’s debt. 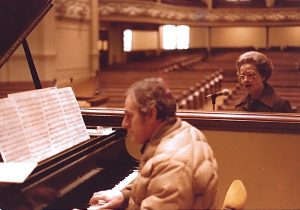 In 2009, on the 40th anniversary of its release, I created a new arrangement of “Pass It On” for Shawnee Press. (Hal Leonard # 35027028) Of all Kurt’s songs from a lifetime of creating music, he is best known for two: “Oh How He Loves You and Me” and “Pass It On.” Are those Kurt’s favorites? Maybe. Maybe not. But like the rest us, Kurt sent his musical babies out into the world to make their own way. Some found their way better than others.

Lesson #2: None of us gets to choose which of our songs the public will like.
Not you.  Not me.  Not Kurt Kaiser.

I find it sweetly appropriate that “Pass It On” is still so well known because its message reflects Kurt so well. He has always “passed it on,” making himself available to young people hungry to know about the world of music. (And Kurt’s musical world is huge.) In 1977, Kurt could have considered me his competition, and withheld his knowledge from a young arranger/songwriter. Instead, he chose to “pass it on.”

Kurt will turn 80 years old this year. He still makes music. He just released a new collection of hymn recordings, titled “Legacy.” When asked to contribute a quote for the CD release party, I offered this: “When I grow up, I want to be like Kurt Kaiser.”

Lesson #3: Be generous with your time and talents.
We all have something worth passing on.