Lessons learned from a life in music.
(#3 in a series of posts)

“Sing to the Lord”

In the summer of 1983, my church (1st Baptist Church, Richardson, TX) asked me to write a choral piece to celebrate the arrival of the new pastor, Jim Keith. I wrote a song called “Sing to the Lord.” I arranged it for choir and piano, and everything went fine. My fellow church members thought I was brilliant. I was the hero of the day. Not long after, I submitted the piece to Shawnee Press. They accepted it and “Sing to the Lord” was on its way to becoming a choral anthem.

About that same time, our church began a pledge drive to raise funds for a new facility. Dr. Keith challenged the congregation to give our best to God and let God do the rest. “Sing to the Lord” is my best anthem ever, I thought. It would generate $2,000 in royalties in its first three years. Maybe more. And so I committed the first three years of royalties from the song to my church’s building fund. I was filled with secret self-importance at my magnanimous act of generosity.

But the plot thickens.

Even though “Sing to the Lord” was written for choir, I believed the song had “artist potential.” I produced a demo recording with a rhythm section backing up my wife, Cindy, singing the lead. At Christmastime, I played the demo for an old college buddy, Dennis Worley. Dennis worked in the Christian music business in Nashville, and was home in Texas for the holidays. He liked the song and offered to show it around Nashville for me. The holidays passed, Dennis went back to Nashville, and I went on with my life as a Dallas jingle writer. 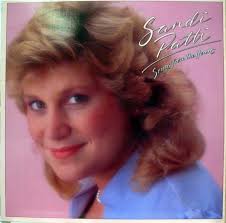 “Songs from the Heart” Cover art

A few months later Dennis called with an amazing story. He had pitched “Sing to the Lord” to Greg Nelson, the top producer of Christian music at the time. A few weeks later, Dennis ran into Greg in the recording studio working with Sandi Patti. And what song were they cutting at that very moment?  “Sing to the Lord.”

This was huge. Sandi Patti was the most successful Christian recording artist ever. If she recorded a song, it became a standard. In my head, I began writing my Song of the Year acceptance speech. But Dennis cautioned me, “We have a saying in Nashville. It’s not final ‘til it’s vinyl.” Not every song an artist records makes it on the record.

So I waited for the record to be finished to see if I made the cut or not.

Sandi’s album, Songs from the Heart, was released in 1984. “Sing to the Lord” was on side one – cut No. 2. The bigger news was my little church song was to be the first single released from the album. It climbed to No. 1 on the Christian radio charts. The record went gold and then some. At least a dozen print publishers put “Sing to the Lord” in every songbook and choral collection they released that year. By the time the church building campaign had run its course, the song I thought would generate $2,000 or $3,000 had contributed more than $30,000 to my church.

LESSON #1:
Give God your best work. Hold nothing back. Let Him do the rest.

PS: And now “Sing to the Lord” is considered a “vintage” contemporary Christian song.  That seems fair, since I feel pretty “vintage” myself most days.  And the song may be staging a come back.  The crazy-talented Mary McDonald recently arranged “Sing to the Lord” for SATB choirs and coupled it with “Praise to the Lord the Almighty.”  (Wish I had thought to do that.)

LESSON #2:
If you do your best work, some times you get lucky and it lasts long enough to be considered a classic.
And then maybe other creative people will put their own unique spin on it.