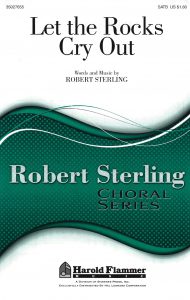 Palm Sunday fast approaches. And with the exception of the Resurrection, the Triumphal Entry stands out as a singular joyful moment in an otherwise sorrowful series of events leading to Jesus’ suffering and death on Golgotha. The Savior’s famous ride into Jerusalem serves today’s Church as the celebratory beginning of Holy Week. Ironically, it was also a pivotal turning point that more than likely accelerated Jesus’s arrest and execution.

The Triumphal Entry is such a hugely significant moment in Holy Week that we sacred composers are frequently called on to set it to music. It boggles the mind to consider just how many “Hosannas” have been penned in Christendom’s 2000 year history. Speaking only for myself, over my career, I’ve written no less than a ten unique Triumphal Entry/Hosanna songs.  And compared to some of my contemporaries, I’m a slacker.

In Luke’s Gospel account of this famous moment, he records a fascinating exchange between Jesus and the Pharisees. The Pharisees chastised the raucous impropriety of Jesus’ followers, who were waving palm branches and shouting at the top of their lungs,  “Hosanna! Blessed is he who comes in the name of the Lord!”  The religious leaders told Jesus to rebuke his noisy disciples. Instead, Jesus offered a most intriguing response. He said, “I tell you, if they keep quiet, the stones will cry out.”

Now, I don’t know if Jesus was speaking literally or figuratively.  Frankly, I can make the case for either. But regardless – I love that answer. I just love it. Jesus was telling the Pharisees that the praise of God and his Son will not be contained. If His children fail to praise Him, then Creation itself, right down to the very rocks, will do the job for us.

So, this Palm Sunday, don’t stay quiet. Make some noise.

Here’s a link to one of those “Hosanna” songs – written with the express purpose of celebrating Jesus’ Triumphal Entry and, secondarily, of giving church pianists something to make them have to practice just a little bit.  It’s called “Let the Rocks Cry Out.”