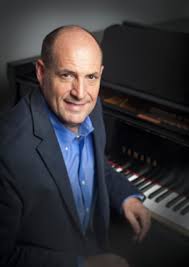 Phillip Keveren is a guy that seems to do it all and do it well: pianist, arranger, composer, orchestrator, producer.  You’ll find his music in just about all the major choral catalogs.  His piano method books (Hal Leonard Music) are used around the world.  His arrangements can be heard on a long list of Christian artist recordings. He is a killer pianist.  And from our chats over coffee, I know him to be a thoughtful guy, who cares a great deal about his profession.  (Check out Phillip’s website to learn more: phillipkeveren.com.)

Recently, Phillip and I took one of our “coffee talks” to the Internet, via email, where I picked his brain about how he chooses what to work on, his “I wish I’d written that” list, and his take on today’s choral music business.

RS:  Describe your decision process when a publisher approaches you to do a choral arrangement.  Does the song itself matter all that much to you?  Or do you think of them all as another arranging challenge?

The reason I ask – I have the reputation of being a hard case when it comes to accepting anthem arrangements.  I didn’t set out to have this reputation, but I turn down as many songs as I accept.  (You do that often enough and folks stop asking, by the way.)   If I think a song is poorly written, I don’t want music ministers to assume the song comes with my arranger’s “stamp of approval.”

You are a much nicer guy than me. Do you ever try to avoid arranging a song you think is sub-par?

Phillip:When I first began arranging, I certainly never entertained the idea of turning down an assignment opportunity. What, are you kidding? They want to pay me for arranging and I would turn them down for any reason other than a pending surgical procedure?!

RS: That is a Universal Truth among all musicians at the beginning of their professional careers.  In the early days I would crawl on hands and knees over broken glass for the chance to get something in print.

Phillip: Over the years, as I developed a reputation as an arranger, this began to change. Like you, I came to see that “arranged by Phillip Keveren” was indeed a tacit stamp of approval on the song itself. It has caused me to take pause and consider carefully when assessing whether I should accept an assignment.

I wish I could say that I’ve always made the right choice. I have arranged pieces I later regretted.

RS:  To protect the guilty, we won’t name titles here.

Phillip: Occasionally, the challenge of “rescuing” a mediocre song with an inspired arrangement has lured me in. This little ego move rarely works out well.

RS:  I am glad to know I’m not the only guy who has made that same mistake.  I’ve come to the conclusion that no matter how nicely you dress up the song, it is still the song that matters.

You know, you arranged and orchestrated a song that Lowell Alexander and I wrote – “Home to Heaven.”  I had already published a pop arrangement of the tune.  But you went for the whole “Americana/Aaron Copland” thing – and nailed it.  I loved what you did with it.  I remember thinking when I heard the demo recording, “I wish I had written that arrangement.”

Are there writers that elicit the “I wish I had written that” response from you?

Phillip: First of all, I was relieved when I learned you were pleased with my arrangement. Arranging another arranger’s song is a bit unsettling!

RS:  I’ve never had that thrill.  Probably just as well for all involved.

Phillip: The choir and orchestra at Brentwood Baptist Church did one of your arrangements in the last six months or so. I am trying to remember the name of the song and cannot at the moment. I was on pipe organ that particular Sunday. My entrance was not until the last section, so I was able to really listen and enjoy the setting. Let me say, that is one orchestration I wish I’d written. It was perfect! To me, an orchestration that supports, inspires and encourages the choir is a sublime achievement. Too many times I hear orchestrations that seem to be in a battle with the choir. There are only so many tones that can exist together peacefully at the same frequency. Somebody is going to win, and it should be the choir!

RS:  First – why am I not surprised you also play pipe organ?  There is apparently no keyboard instrument you cannot play.

Second – thanks for the compliment.  But if you look at my earlier music, I’m afraid you’d find too many of those “battles” you mentioned between the choir and orchestra.  And the choir always lost the battle.  Then about fifteen years ago, I found myself in a large Texas Baptist church on Sunday morning.  This church had everything going for it, musically speaking: an excellent choir, a full orchestra with rhythm section, praise team, a fine sound system, and solid musical leadership. But when they sang the choir anthem that morning, I could not hear a single word the choir sang.  The only intelligible lyrics were random solo phrases sung by members of the praise team!  The orchestra covered up everything.

I returned to Nashville and began writing fewer notes for the orchestra accompaniments.

Phillip: Here is a rather scattershot list of things “I wish I’d written”:

RS:  Great list.  I’ve ripped off “Adagio for Strings” – but I’m not alone in that.  And I am definitely with you on David Hamilton and Ronn Huff.  They are two of the most talented guys I’ve ever met.  And Michael W. Smith is a truly gifted tunesmith.

Years ago, I learned a lot about the “less-is-more” approach from copping one of Ronn’s string charts for a choral recording.  Not to sound like the punch line to a joke about jazz, but I promise you it was the notes Ronn didn’t write that made the chart special.

Speaking of Samuel Barber – and this is a total aside – Did you know he wrote all his truly famous music, including “Adagio for Strings” when he was in his twenties?  And he lived to be 91.  I have to wonder how many times he was asked – for decades – “Hey, Samuel, when are you gonna write another ‘Adagio for Strings’?”  As if it could be replicated.

Here is some of my “I wish I’d written that” music:

Phillip: Let me add a huge “ditto” to your admiration of Gene Puerling – a master of harmony and voice leading. I am also a Mancini fan. Check out “March of the Cue Balls” for a bit of left-of-center 12/8 fun!

RS:  Oh, yes.  “Cue Balls” is a great tune.  I love the muted trombone bit at the beginning.  And how Mancini seamlessly moved the whole chart from a bouncy march into a quick swing for the bridge.  I’m pretty sure our knowledge of this piece has forever sealed our membership in the Music Geeks Club.

Okay – so how about one more subject change before we close this up?

To borrow from Charles Dickens, we live in the best of times and the worst of times.  Never has it been so affordable to create music – recorded and in print. Anybody with Garage Band and Finale can build a home publishing company.  On the other hand, never has music been so ubiquitous and valued so little.

To survive, a working musician must adapt.  In the choral music world, we are being pressed harder and harder to produce more work for less money.  At some point, the whole thing could snap in two.

How are you dealing with these changes?  Where do you as a businessman draw the line?

Phillip: It’s really two issues. (1) Music. (2) Business. In many ways, there are as many or more exciting things going on in music as any time in my life. There are superb musicians at every turn making really interesting art. There is a lot of junk out there, too.  But that has always been the case.

RS:  Agreed.  We tend to forget all the bad music.  As if it were never there.

Phillip: The Internet just makes it possible for a lot of noise to reach a lot of folks.

RS: It made the world flat once again.

Phillip: But the business of music. Hmmm.  We are clearly in the center of sweeping transformational change. Making a living from music is becoming more and more of a challenge. Will the 20th century be seen as an anomaly – a unique period of history when songwriters, performers, arrangers, et. al., made fine livings creating things that could be protected by copyright and placed in and on media that were sold for profit?

RS: You are not alone in wondering about that.  A recent Mix Magazine editorial asked that very same question.  When you think about it, it’s only been in the last 75 years or so that becoming wealthy from music was even a remote possibility.  Technology – mass production and broadcast media – made it so.  And technology – the Internet – may well return us to the days of patronage and wandering minstrels.

Phillip: To your question: How am I coping with this as a businessman in the music trade? I have been very fortunate. I am still making music full-time and enjoying a rewarding career. But my fees – unlike the price of nearly everything else in life – have gone sideways or down.

Phillip: The market simply will not bear what it could even a few years ago. Royalty earnings are not what they once were. It takes more work to generate less profit.

RS:  In my estimation, choral music royalties are down about 75% from their peak levels from, say, fifteen years ago.

Phillip: I am a “glass-half-full” type of personality, so I intend to keep swinging for the fence. But the business of music is a moving target these days. There are few “sure things.”

RS:  I am infamously a “glass half-empty” guy. But I, too, keep stepping up to the plate.  It’s all I know how to do.  And – here’s the kicker – I love doing it.  And I will continue to adapt for as long as I can.  In my case, that seems to be working more often directly with the end user – the church.  Or even in self-publishing, which I’ve begun on my website, on a small scale.

Are you seeing similar shifts in your work?  Are churches and artists coming directly to you, skipping the publishing companies and the record companies?  Have you ever given much consideration to self-publishing?

Phillip: The vast majority of recordings I produce these days are for independent artists. Even the artists recording for labels are often in a partnership where the artist puts up the money for the album and the label pays for marketing. I am writing choral arrangements and orchestrations directly for churches more than ever. I am totally fine with all of this. As long as we’re making good music…

As for self-publishing: “yes” is the short answer. So far, I have not gotten my act together to the extent you have. I really admire the step you have taken. I’m intrigued with the sense of freedom this model seems to promise. But, it does add yet another skill a composer must develop – “editor.”  Did you, back in the paper and pencil days, ever imagine you’d become your own copyist?

Huge thanks to Phillip Keveren for playing conversational “tag” with me via email.  I hope my readers (all three of you) appreciated the insights of two old codgers in the choral music business.  Well, more accurately – one old codger and one middle-aged codger.  It’s not fair to lump Phillip into the AARP crowd just yet.  But his day approaches…

Be sure to visit Phillip’s website: phillipkeveren.com.  Check out his music and his upcoming piano workshop appearances.