I posted back in July about a project I’ve begun with the crazy-talented Luke Garrett.

(Quick Recap: Luke came to me wanting to record a collection of my songs. I was honored and said “yes” before he had a chance to reconsider.)

Yesterday, Luke and I were back in the studio with a rhythm section of some of the finest recording musicians on the planet, aided by the mighty Doug Sarrett’s awesome recording skills. We spent the day at The Tracking Room recording rhythm for six songs, all of them quite different from one another. (It’s a testament to the players’ skills that they could change musical gears from song to song and never sound anything less than fantastic.) When the dust settled, everybody had a great time, and Doug captured some memorable tracks that will become the underpinnings of what I’m sure will be a terrific finished recording. 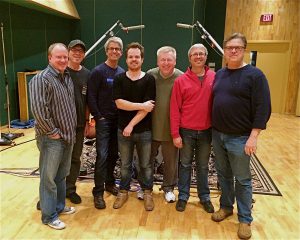 Thanks to the band: David Hamilton on keyboards, Mark Baldwin on guitars, Craig Nelson on bass, and Aaron Sterling on drums. (That’s right. I managed to get Aaron to come home from LA to play for his old man’s project.) And thanks to Doug and Bryce for making everything sound so good and move so smoothly.

And most of all, thanks to Luke. It is the highest sort of praise that a singer of his caliber would choose to record a project entirely of my songs.

I’ll continue to post as we make progress. We’ve no deadline to meet, so we’re taking our time and trying to do everything as right as we can. I’m pretty sure we got things right yesterday.