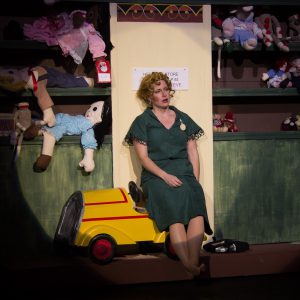 Earlier last week, I ran down to Athens, GA, to see the Cornerstone Productions version of “The Christmas Post.” I wrote about that adventure in Part 1.

This past weekend, my wife and I flew up to Novi, Michigan (a suburb of Detroit), to see Brightmoor Christian Church’s version of the show. Brightmoor is the church that commissioned the three new songs for the show.

I had high hopes for the production. After all, this was the church with the vision and the courage to have three new songs (and the fill-blown tracks to go with them) created for a 14-year old show. But one never knows…

Well, the folks at Brightmoor did not disappoint. Not one bit.

Cindy and I were joined by my co-writer, Deborah Craig-Claar, and we were lucky to catch two performances on Saturday. Both performances were terrific. The sets were professional. (They looked like 3-D realizations of a Rockwell painting.) The lighting and sound guys never missed a cue. Technically the show ran like a Swiss clock.

The cast was energetic and involved right down to the last Newsie. The leads were all superb, to a person. Just superb. From Katie, to Maxwell, to Herzog, to Sam, and on. All of ’em were great.

But it would be criminal not to mention what a great job three of them did in particular.

Darlene Jebson played the role of Alice Garfield like it was written for her. It was difficult to take one’s eyes off her, even when she wasn’t singing. Her duet with little Katie on “A Little More Christmas” was powerful stuff. The audience (and the writers) ate it up.

Vanessa Harris absolutely nailed the part of Hattie McGee. She got laughs from lines we never knew were laugh lines when we wrote the script. And she choked us all up when she sang the final reprise of “Anything Can Happen.” Later, we learned this was Vanessa’s first ever time in a show. Amazing.

And Renee Basel, an honest-to-goodness Atlanta native living in the frozen north, brought her full measure of Southern charm and wit to the role of Dixie Plunkett, bringing down the house with “Keep the Faith.” 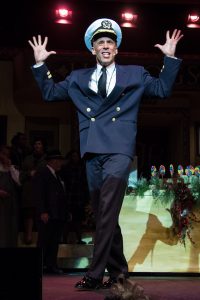 In short, the show was terrific, and it would not have happened were it not for two people.

David Basel is the music pastor and head of the creative arts ministries at Brightmoor. He directed the show, and he spearheaded the the effort to create the three new songs. He even ran the soundtrack during the performances. David anonymously remained behind the scenes during the performances, allowing all the applause to be directed to his talented cast and crew. This production is a tribute to him creatively.

Pastor Jamie Kjos is the other indispensable person in the process. No church of any size can muster this sort of production without the enthusiastic support of its senior pastor. To say Jamie Kjos is enthusiastic is an understatement. I saw him, at every opportunity, encourage his people, build them up, and share their talents with the entire community.

A show like “The Christmas Post” comes at a cost, especially when it’s done on this scale. Financially, emotionally, and physically – it’s a demanding undertaking for hundreds of people. Jamie and David and the congregation of Brightmoor Christian Church shouldered the entire cost, and then they gave the show away – at no charge – to the people of Detroit. Some 6,000 folks were blessed to see the show last week. Each of them saw a Christmas story of faith and renewal professionally presented by their friends and neighbors out of love for Jesus and love for the people of Detroit.

Thank you, everyone at Brightmoor, for letting me be a part of that experience. Thank you for your hospitality to Cindy, Deborah and me. And thank you for your unwavering commitment to the Kingdom and the arts.