“Time flies when you’re having fun.” 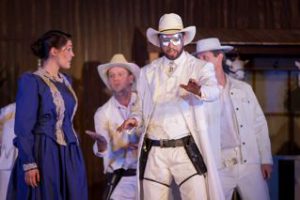 Twenty years ago, I created a character for a little musical called “For Unto Y’all” – the angel Gabriel in the wild West.  If you had asked me then if people would still be performing the show 20 years later, I would’ve probably said, “No way.” But five years ago, I began re-writing the show. And one year ago (as chronicled here in earlier blog posts), Howard and Sharon Raymond, of Adelaide, Australia, partnered with me to complete the new version. And two days ago, their premier performances of 2013 were completed.

Here’s a pic of Andrew Crispe as Gabriel, singing “Aint Nothin’ the Lord Can’t Do” to Olivia Raymond, as Mary. 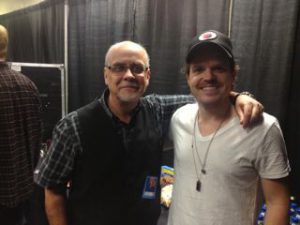 Almost forty years ago, I met Steve Samuel at Baylor. Steve played drums in my club band before he moved off to LA, and then Austin, TX, to build a successful career as a performing musician. A few years after meeting Steve, another character entered my life – my younger son, Aaron. Aaron also turned out to be a wonderful drummer, and is  making a name for himself in LA as a studio musician.

Here is a photo of Steve and Aaron back stage after the John Mayer concert in Austin, where Steve went to hear Aaron play with Mayer.

Both these photos remind just how blazing fast time can pass by. Though it sounds cliche’, it really doesn’t seem all that long ago that I wrote the songs and dialogue for Gabriel: “For unto y’all is born this day in the City of David a Savior who is Christ the Lord.”  And it seems like only yesterday that Aaron was a teen-ager, practicing drums in the garage.

I tend toward melancholia a  lot of the time. And on a cold, overcast wintry day, it’s easy for me to be melancholy about how much has happened so very fast. But today, I am choosing to be simply be grateful that I have been given the opportunity to create the music I have made these past 40 years, and that God gave me two wonderful sons, both of whom turned into terrific young men.