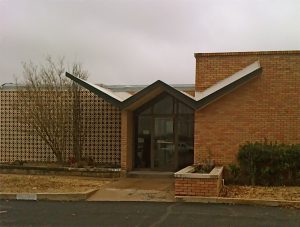 I’m back home after my jaunt (Can you really call 1800 miles a jaunt?) to Texas. Saw family in Dallas and friends in Waco. I made new friends in Brownwood. Spent a small fortune on gas. (Which makes me wonder – why aren’t we drilling for oil here????)

My time at Howard Payne University was terrific. Monte Garrett and his students did a wonderful job on Tuesday night in a concert of my anthems. The audience was receptive and warm – even when subjected to me singing. (Texans are kind people.) My time at HPU reminded me that the world of Southern Baptists is very small, indeed. Everyone I met knew someone I already know somewhere else. In fact, one of the first faculty members I ran into, Greg Church, sang the role of Joseph in my premier of “Two from Galilee” at Southern Seminary, way back in a previous century.

So – a heartfelt “thanks” to Monte, his students, and the folks at HPU. Thanks for your hard work and hospitality.

My visit to Waco was fun. I was there officially to attend a meeting of the board of the Center for Christian Music Studies. Unofficially, I managed to catch up with some old friends. Mark Nalley and I hadn’t seen one another in decades. He and I had a jazz band in college – “Night Flight.” (Groovy, huh?) Mark went into public education and has already retired! (I chose the wrong path, it seems.) I stayed the night with my old roommate, Wiff Rudd, and his lovely wife, Jeanette. I had lunch with another old friend – Jim Thompson, who somehow never ages. Not sure how he does that.

I drove by the first place Cindy and I lived in as a married couple. Hasn’t changed at all. I went by the famous “W” building – the original home of Word Music, where Cindy worked as a telemarketer, and I hung about snagging free-lance work from Kurt kaiser and Charlie Brown. Somehow, the building shrunk, because it’s not nearly so formidable as it seemed when I was in college. Word was HUUUUGE, wasn’t it?

Perhaps just as important as all the time with friends, I managed to score some true Tex Mex food, real BBQ, chicken fried steak, and one of my big sister’s homemade chocolate cakes during my week to the Promised Land.