Anytime a government huckster (and they are ALL hucksters) want to grab more money for something, one of the standard appeals is – it’s “for the children.” Now this is a blatant, emotional approach. But it works  – because grown-ups care about their kids and grandkids. The fact that the money rarely does anything to improve the lives of children doesn’t seem to keep politicians from hawking this old trope.

Well, for the past several years, I’ve been working alongside an organization that really is “for the children.” And by children, I mean, more specifically, teen-agers. In 1990, Randy Edwards, a San Antonio music minister started YouthCUE, an organization that builds and supports youth choirs around the principles of quality choral music, musical excellence, and personal responsibility – all wrapped in genuine Christ-like love for the kids.

I was as surprised as anyone to discover there are still churches and communities teaching kids how to properly sing 4-part SATB choral music. Ironically, the same year YouthCUE began, I became the exclusive creator of youth choir music for Word Music in Nashville. I was told then that church youth choirs were limited to singing simple, SAB pop-styled music. But apparently, no one told Randy Edwards that. So, in those years when youth choirs were disappearing across the country, Randy and YouthCUE were starting choirs – real choirs, singing grown-up music.

I was introduced to Randy five years ago by his brother, Mark Edwards.  (Mark had been my music minister at First Baptist Nashville.) Randy needed a new piece of music for a specific concert theme (“Look at the World”), written for choir, orchestra, and featuring a tenor soloist from the New York Metropolitan Opera. Somehow, I successfully pulled that out of my hat, and my relationship with YouthCUE began. Soon after, I was composing orchestral backgrounds for their concert poetry recitations. Then came the first YouthCUE podcast, needing not only theme music, but a producer. Then came music for videos, more orchestral work, my own appearance in a YouthCUE concert, and two more weekly podcasts. I’m beginning to think Randy has made it his personal mission to keep me off the streets and out of trouble. 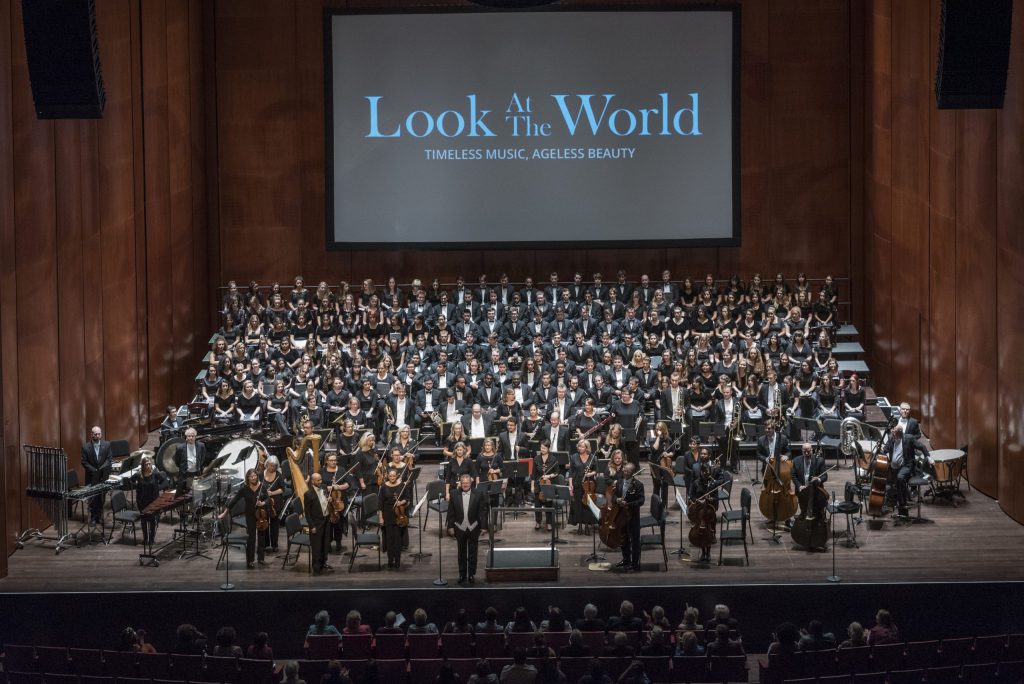 But – at the core of all they do, YouthCUE is about those teens singing their hearts out.  And I’ll just say – the kids sing very well. I’ve been blown away by the quality of their concert performances. Randy gets amazing results out of them. It turns out, teen-agers are indeed capable of singing challenging music. They just need someone to care enough to teach them how, and who respects them enough to have high expectations. The YouthCUE experience offers the teens the opportunity to be part of large concert events, singing  with professional orchestras.  These concerts can be life-changing moments, since many of the young singers have never before heard a live orchestra, let alone sung with one. It isn’t at all unusual for teens to participate in YouthCUE through their  junior high and high school years, making lifelong friends with their fellow singers.

YouthCUE also serves as a vibrant support organization for youth choir directors all across the country, providing them education, encouragement, and community. YouthCUE’s three weekly podcasts, along with their newsletter, and website  (youthcue.org) are a lifeline for choir directors working to keep their kids singing together.

So why does the work of YouthCUE matter?  It matters because it really is “for the children.” It’s changing their lives for the better. It matters because these teens are literally the next generation of adult choir singers. Without children’s choirs and youth choirs, we’d soon have no choirs at all. YouthCUE is helping to keep quality choral music alive.

And why is it important to teach teens “serious” music? It’s important because the discipline required to sing more challenging music teaches the kids so many life lessons: Hard work pays off. Listening is important. Arriving on time shows respect. Pulling your own weight helps the entire group succeed. In addition, as they sing the deeper theological truths of the texts, teens will absorb those those truths, and carry them in their hearts for years. As Randy teaches them, this will become the “soundtrack for their life.”

So, if you, or anybody you know, is working with youth choirs, or wants to start a youth choir, I recommend you get in touch with the folks at YouthCUE. You’ll find willing help, tons of information, and will see for yourself just what a youth choir is capable of achieving.

And if you’re still on the fence about it, remember – it’s for the children.