I suppose this time had to come.

My first publications went into print in the very late 1970s, when I was just a kid barely out of college.  By the mid-80s, I had begun to build a decent print catalog. By 1990, folks had been seeing “arranged by Robert Sterling” for more than a decade.  Every now and again in the 1990s, I would meet a music minister who expressed surprise at my relative youth.

“I thought you would have been much older,” was a not-so-uncommon thing for them to say to me back then.

Not so much any more. 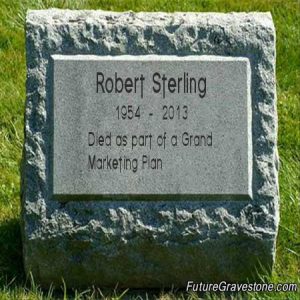 In fact, I recently heard from my friend and fellow composer, Heather Sorenson, that I am dead.  Or at least, I am believed to be dead by some.

Heather texted me a few days ago, saying she was visiting some folks in New Jersey for a composer event, and they had a signed copy of one of my pieces on their wall, alongside several other composer’s music.  My piece held special meaning to them since I had “died this past year.”

Heather informed them she had received an email from me very recently, and the email had not come from the Afterlife. (Heaven.com?)  It should be noted the people were disappointed to learn I was still living.

This episode got me to wondering if my choral music sales might actually spike a bit in the event of my demise – either out of sympathy or the realization that my catalogue has closed permanently.  And since choral music sales have taken such a hit these past years, it occurs to me I could take a cue from the Beatles and fake my death.  Publishers could even print “Robert is dead” backwards in fine print in the copyright notices.

Hey, anything to sell some music these days, right?

Maybe not.  But if things ever get desperate, it’s an idea I might come back around to.

In the meantime, I am happy to disappoint Heather’s acquaintances in New Jersey.  Lord willing, they will have to wait a couple more decades to cash in on the increased value of that piece of music signed by Robert Sterling, deceased.