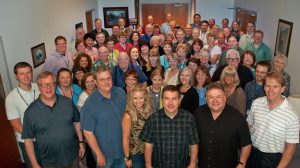 For the seventh time in the past nine years, I spent the week after Father’s Day at Pine Lake Music in suburban Atlanta, teaching, critiquing, and cajoling the registrants of Joe Martin’s Composer Symposium in the arts of songwriting, choral composition and arranging. The Symposium has become something I genuinely look forward to each year. It has taken on something of a family reunion atmosphere, thanks to the large number of folks who return each year. This year saw a record turnout, and it was encouraging that among all the familiar faces was a large number of first-timers.

While the musical emphasis lands pretty squarely on traditional choral music at the Symposium, we heard a little bit of everything from Christian rock music, salsa music, impressionistic piano music, and music for children’s choirs and hand bells. In fact, right after I bravely  I confessed my general dislike for children’s music and hand bells (C’mon, who reeeally wants to listen to kids and hand bell ringers???), I got a mountain of grief from the crowd when the very next piece was written for (you guessed it) children’s voices AND hand bells.

I couldn’t help but notice the steady improvement in the submissions over the past years. The music we hear from the registrants gets better each year. (It’s not unusual to see two or three pieces from the week weave their way into print, granting their composers a little slice of musical immortality.) Of course, as the submissions improve, our criticism gets tougher – because we believe the music is worth the added effort of all the rewrites.

Something else that encourages me is this: It is not uncommon for registrants to announce before presenting a piece that they have already discovered many of the flaws in their work. “I know what you’re going to say,” they tell me. “I’ve already determined to fix this, or change that, or rewrite this.” The flinty ability to criticize your own music with an unflinching eye is a giant step in any professional’s creative process. And this shows me that the lessons of the past seven years are sinking in.

Many of the registrants at the Symposium have begun to make a little money from their compositions. None of them has broken out into full-time composition, but their passion is occasionally being rewarded monetarily – and that’s okay. Money isn’t the real reason we write music. We do it because we love it. But a little money never hurts.)

Thanks to Joe Martin for having me back year after year. Apparently, I have fooled him into thinking I am invaluable to the success of the event. (They’ve already booked me for next year!) Dawn Young and the folks at Pine Lake were once again terrific in the organization and all the day-to-day details. It was a treat to work with my fellow teachers: Joe Martin, Lee Dengler, Keith Christopher, Heather Sorenson, Pepper Choplin & Dan Forrest.

I hope to see everybody back next year! Until then, all of you buy my book and pretend I’m telling you how to rewrite your song!