Here’s another behind-the-scenes look at a recent choral anthem… One for traditional choirs:

For those who compose music for the Church, perhaps the most crucial element in our work – even more so than the music – is the lyric (or the “text,” as traditional choral folks like to call it.)  After all, the words we set with our music are what distinguish the sacred from the secular. 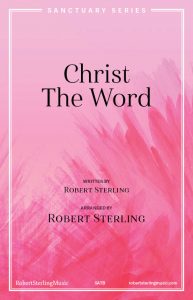 When my wife and I left Nashville to return to Texas, a friend gave me a book of Puritan prayers. The prayers were written from the 1600s to the 1800s. No authorship was credited to any of them. These prayers are, in a word, deep — much deeper, in fact, than the way most of us pray today. They are consistently filled with searing reverence and awe for God and gut-wrenching penitence for one’s Self.

As I went through the book, a particular prayer jumped out at me, largely for its unique use of the phrase “Christ the Word.” The Gospel of John refers to Christ as “the Word,” but never as “Christ the Word.” I found the phrase, which was used in the closing line of the prayer, to be captivating, and the prayer itself to be quite beautiful. It wasn’t, however, a lyric. It was a prayer, too lengthy to be sung, and without any sort of musical form.

Over the course of a few days I spent time with the prayer, analyzing it and gleaning the thoughts that might work well together to create a fluid, cogent lyric. After filling up a couple of legal pad pages with snippets and phrases, I crafted a first and then a second draft at the computer. The second draft had a definite AABA+ musical form (or AABC), and it was this draft I took to the piano:

(A1)
HOLY FATHER,
IN A WORLD OF CHANGING THINGS
CHRIST THE WORD REMAINS UNSHAKEN.
MAY I ABIDE IN HIM ALONE,
AND REST ASSURED ON HIS FOUNDATION.

(A2)
FOR EVERY MERCY COMES THROUGH CHRIST,
BY HIS DESIGN, AND BY HIS PURCHASE.
HOW SWEET TO BE SO NEAR THE LAMB,
WHOSE PRECIOUS LIFE OBTAINED MY PARDON.

(C)
O GOD, WHO HOLDS WITHIN YOUR HAND
THE LONGING HEARTS OF YOUR CREATION,
MOLD AND SHAPE ME TO YOUR WORD,
IN THE IMAGE OF YOUR SON,
SO MY EVERY STRENGTH AND COMFORT SHALL BE
CHRIST THE WORD!
AMEN.

At this point, the music began to reshape the words. I found a brief musical theme that enhanced the contemplative nature of the opening four lines (the first A section).  That required the change of a syllable or two.  But it was the final section that the music shaped most, as the music swelled to a peak and then subsided. The differences in the 2nd draft and the 5th (and final) draft are subtle but significant. Here are few other changes to note:

1. The “Holy Father” address at the beginning was dropped. Interestingly, the “Amen” disappeared in the 3rd & 4th drafts, but returned in the final version.

2.The final draft is leaner, with a handful of words removed to make the words more easily sung.

3. Another typical last minute rewrite for me: Changing “this Mediator” to “my Mediator” to create alliteration. (It’s often those small changes that make a significant difference.)

Here is the final lyric:

NOW IN THIS WORLD OF CHANGING THINGS,
CHRIST THE WORD REMAINS UNSHAKEN.
MAY I ABIDE IN HIM ALONE,
REST ASSURED ON HIS FOUNDATION.

FOR EVERY MERCY COMES THROUGH CHRIST,
BY HIS DESIGN, AND BY HIS PURCHASE.
HOW SWEET TO BE SO NEAR THE LAMB,
WHO WITH HIS LIFE OBTAINED MY PARDON.

AND WHEN I CROSS THE FATHER’S WILL
A CHASM GROWS, SUCH SEPARATION,
A GAP THAT ONLY ONE CAN FILL –
THE HOLY GIFT, MY MEDIATOR,
CHRIST THE WORD.

The music for “Christ the Word” adheres to one of the oldest standard song forms, the AABC.  The final C is an altered version of the A: similar, but different enough to be called a C. So, in that regard, “Christ the Word” is simply a song. With a slightly different arrangement, it might just as well be sung by a solo voice as a choir. But I composed the music with a choir in mind, making choices that would take advantage of the choral sound. In the strictest sense, “Christ the Word” is a song arranged for choir and piano, rather than a choral composition – but that is really splitting hairs.

What about the choral arrangement itself?

Despite some harmonic surprises for the choir, “Christ the Word” is not difficult to sing. It may sound harder than it is, but then I think that is a good thing. A small choir could perform this piece successfully with a few rehearsals. A large choir would sound magnificent, and would find it fairly easy to master. I used a healthy mix of unison and four-part writing. I took care with the voice leading, so that when the “surprise” chords appeared (see measures 31 & 45) they are easy to land with confidence.  The only divisi occurs in the final bars in the Bass line using intervals every Bass section has sung many times.

The piano part is lovely and lays under the hands well. I believe accompanists will enjoy playing it and not find it particularly challenging.

Most of all, I hope that church choirs and congregations will be moved by the message of the lyric, just as I was moved by the power of the original prayer from which the lyric evolved. The words, written generations ago, convey a depth of thought (no thanks to me) that exceeds so many of the songs being sung in church today. In truth, I would hope that these words might be printed in Orders of Worship, or placed up on screens, to be read by the congregation as the anthem is sung in services.

I will likely never know the name of the person who composed the original prayer. But I am grateful for the words, and hope they continue to bless the Church for years and years to come.

You can watch a video demo of “Christ the Word” here.