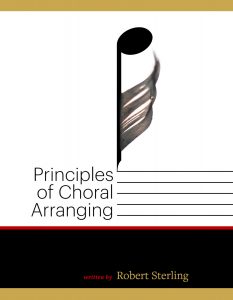 In my book, Principles of Choral Arranging… wait, what? You didn’t know I wrote a book on choral arranging??? Well, here’s a link.  Now – back to the story.

In Principles of Choral Arranging, I make the point that sometimes you choose the material, and sometimes the material chooses you.  This applies also to composers and songwriters.  In the case of one of my recent choral compositions/arrangements, it was a little of both.

In January, 2021, I was commissioned by Georgia’s Jubal Chorus to arrange and orchestrate the hymn “And Can It Be,” in honor of my friend and choral conductor, Jon Duncan. So – the material chose me.  As simple as that, right?  But I have a knack for making simple things complicated. And before I was done, this arranging gig became a serious composing challenge, and a reminder to never throw away one’s old ideas.

I’ll begin by saying that the text for “And Can It Be” is a soul-wrenching, beautifully poetic confession by Charles Wesley. It express one of the immutable truths of Christianity: The love God demonstrated in the sacrificial death of Jesus is beyond our comprehension.  The heart of the lyric is summed up in this familiar line…

Amazing love!  How can it be that Thou, my God, shouldst die for me?

The entire text is a masterpiece in hymn-writing. How could I not want to work with words that powerful?  There was just one problem: I really don’t like the hymn tune that accompanies the text. I mean – I reeeeally don’t like it.  Written by Thomas Campbell in the early 1800s, the music is bold and declarative, while Wesley’s words are pensive and awestruck. What’s more, Campbell’s melody is rangy and angular, employing awkward melisma is several spots. The only line of music that is easy to remember are the notes accompanying the text’s most famous line, above. The hymn tune is quite difficult to sing, and were it not attached to Wesley’s words, I suspect it would be long forgotten by now.  Of course, that’s just my opinion. But I knew I couldn’t do Jon Duncan justice arranging a melody that I didn’t connect with.

So… I chose to write a more contemporary setting for Wesley’s words, one that I hoped would better reflect the sheer wonder at God’s amazing love. Because this was to be a modern setting, I took the dangerous risk of altering some of the original words, to make them more readily understandable by contemporary listeners. As brilliant as Wesley was, he wrote in ways that sometimes sound archaic to our ears. An example of my rewriting is found in the opening lines of the piece. Here are Wesley’s original lines:

And can it be that I should gain
An interest in the Savior’s blood?
Died he for me, who caused His pain?
For me, who Him to death pursued?

The words are beautiful, but the third and fourth lines employ a poetic sort of “Yoda-speak” that sounds awkward to the modern listener. Wesley also rhymed “blood” with “pursued,” which may have worked in his time, but isn’t an effective rhyme today. I retained the first two lines and rewrote the next two, restating Wesley’s content in a more contemporary way, while also strengthening the rhyme. I changed them from questions to a simple statement that logically follows the opening lines:

And can it be that I should gain
An interest in the Savior’s blood?
For it was me who caused His pain,
My sin that drew the crimson flood.

Other similar lyric changes were driven by the new melody, which is more relaxed, song-like, and easier to sing. Significantly, Wesley’s most famous line, his “hook” if you will, became:

Amazing love!  How can it be that Christ should die for me?

So what about this new melody? This is where I remind you to never throw away your old ideas.

As I searched for music to accompany the words, I realized I was hearing a melody in my head that I wrote some thirty years ago. The song never landed anywhere, but I always liked the tune. I had made multiple attempts at a lyric re-write, but never with any luck. At one point, I even had a couple of other writers take a shot at writing new words, but nothing came of those attempts, either. Yet now, the lyrics to this re-worked Wesley hymn were singing naturally to this old tune of mine. I got a little “goose-bumpy” at this moment, discovering that words written nearly 300 years ago, were fitting almost perfectly on a melody I composed three decades ago. It was as if God had connected Wesley and me across the span of centuries. And that could only happen because – I didn’t toss out that old melody! 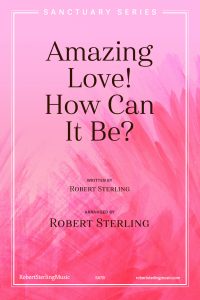 The end result is a dramatic choral anthem that begins with a quiet, theatrical hush, and ends with an explosive declaration. In deference to Thomas Campbell’s original tune, I book-ended the arrangement quoting the hymn’s most famous line with his original melody.

Amazing love!  How can it be that Thou, my God, should die for me?

You can listen to the anthem here, with a score-play video.