An amazing thing has been developing around here for the past few months. I’ve waited to write about it until it was “real.” (A lot of things in the music business appear real, and then fizzle out before ever happening.) But now, it is real. So, let me tell you about it. Some of this story has already been documented here in my blog (see “Updating a Cowboy musical” March 12, 2009), but I’ll recap quickly. 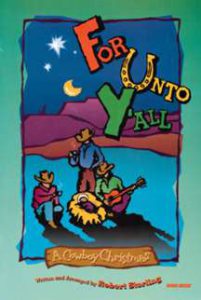 Twenty years ago, I wrote a clever Christmas musical for youth choirs, called “For Unto Y’all: A Cowboy Christmas Musical.” It retells the Christmas story set in the Old West.  “For Unto Y’all” didn’t set any sales records, but the folks who performed it loved it.  It continued to be performed year after year, as dinner theater material for a lot churches. Even some community theaters took it on. There was only one problem with the show: For it to be real musical theater, it was too short. It ran about 50 minutes, and authentic musical theater one-act shows are at least 80-90 minutes long.

Then in early 2008, at a point when I apparently had too much free time on my hands, I took it upon myself to expand “For Unto Y’all” into a more complete musical theater experience. I added characters (the wise men), wrote new songs for Mary & Joseph, re-wrote some of the old songs, and punched up the script.

In 2009, I approached Word with the idea of releasing the new-and-improved “For Unto Y’all.” But we could never make the budget numbers make sense. Still, I continued to work on the show whenever I had some free time. I wrote more songs. I tweaked the script several more times. Blah, blah, blah. It was the “endless re-write.”

Then, about a year ago, I was contacted through my website by a fellow named Howard Raymond, from Adelaide, Australia. He and his wife, Sharon, have an independent, auditioned choir, called The Soul Factor Gospel Choir. (http://www.soulfactorgospelchoir.com) Soul Factor sings concerts and stages Christian musical theater all across the great “Down Under.” They had performed “For Unto Y’all” in the past, and wanted to reprise the show but it was too short for their purposes. Howard wanted to know if maybe, just maybe, I’d be willing to make it into a longer show, so that it could be a complete musical theater experience.

This is was the beginning of what I know to be truly a God-led development, and what is emerging to be a friendship with a wonderful couple whom I’ve only met via email and Skype.

I sent the Raymonds the new version of “For Unto Y’all,” complete with my laughably bad songwriter demos of the new songs. And over the next ten months, they became increasingly convinced they wanted to do the show. But there was a problem: They needed to have performance tracks, and there were none. I had re-written the old songs to the point where the original performance tracks wouldn’t work. And there were no tracks for the new material. (The tracks are the single biggest expense in creating any product like this.)

So, about three months ago, the Raymonds let me know they wanted to cover the cost of recording the tracks. Keep in mind – up to that point, we had only communicated via email. This was an amazing thing to me.For all Howard and Sharon knew, I was a complete scoundrel who might run off with their money. For all I knew, they were “all hat and no cattle.”  Turns out, they were for real. And I just spent the last two days working with some of Nashville’s finest country musicians, recording the tracks for the new version of “For Unto Y’all.”

We are far from done. Next week, we record the group vocals. In the days after that, I’ll record soloists and add a little harmonica to the tracks. Then comes the mix. But one thing for sure – it’s real. It is happening. With any luck, the new “For Unto Y’all” will be available to others one day in the not-so-distant future.

I’ll write more as the recording develops. But I’ve been keeping this to myself too long.