For the first time in ten weeks, I woke up this morning to NOT face the task of arranging and orchestrating the musical I’ve been working on for the past year.  And though there is still much to be done on the show, one of the largest single tasks involved in the show’s creation has been completed.  And it is a good feeling. 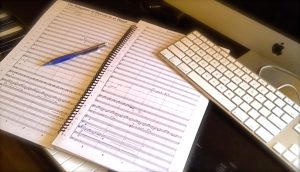 Yesterday afternoon, I finished the final music cue.  Ironically, the last piece was the show’s Prologue.  Though, for those of you working on large shows, there is wisdom in doing the Prologue or Overture last.  By then, you will have developed your various themes for the show, and  can incorporate them into the Overture as a means of introducing the themes.

As it stands, the show contains some 83 minutes of music – all for full orchestra, plus solos and chorus voices.  The 2200+ measures in the compiled score come from fifteen new songs, five reprises, and ten instrumental music cues.  The shortest cue is sixteen bars long.  The longest song goes to bar #150.

I still face the work of cleaning up.  When a single job stretches over ten weeks, editorial drift happens.  I must go back now and make sure the scores are laid out uniformly.  And I need to prep all the individual parts for recording.  Oh, and then I must produce a recording of all the music.  (But that’s the fun part of the work!)  I will be working on this show for several more months.  But yesterday was a definite milestone.

I don’t know know about you, but I revel in the feeling that comes with completing a significant task.  I like it so much that the desire for that feeling of accomplishment can drive me to complete a job that is less than fun.  I have never in 35 years worked on a single project that stretched over this much time.  So I am relishing this moment of completion, temporary though it may be.

One of these days, I will post more about this show.  I could write a dozen blog posts on this one project.  But not today.